Though we are still getting the usual rhetoric about how man-made climate change is destroying the earth unless we act immediately, we are not hearing about the unusual climatic conditions affecting parts of the Arctic this year.

There is a reason for that.

This summer has been a been a particularly cold one in Greenland and it doesn’t fit the man-made global warming narrative that the ice is melting and will result in rising ocean levels unless we immediately do something to reduce CO2 emissions.

But not only is the cold weather disrupting the narrative of the climate-change activists and politicians, the cold weather is also having a profound impact on shore birds that nest along Greenland’s coastline each summer.

According to Scientific American, typically by June the snow has receded in Greenland allowing shore birds to nest and raise their young in July. However, this year has been cold and the ice and snow has continued into the summer preventing shore birds from finding food and nesting spots.

In an interview with Scientific American, Jeroen Reneerkens, from the University of Groningen (Holland) stated:

“The Tundra was 100 percent covered in snow, and it was a very deep layers. It was a big shock to see the place like this.”

The snow is about a meter deep. They are concerned that it will stop the yearly reproduction cycle of the shore birds and could profoundly impact future populations.

But this cold-weather problem is not just being noticed in Greenland, a similar thing is happening in Russia. In June, two ports on the arctic circle were blocked by a massive ice pack, preventing ships from leaving.

The Russians use the Arctic ports on the Golf of Ob to ship out gas and oil, but not this year. And even nuclear powered ice breakers are finding it challenging to break and free the ships.

In an interview with The Barents Observer, Andrey Smirnov a spokesman for Rosatomflot, the government-owned company that operates the Russian ice breaking fleet said:

“The global warming, which there has been so much talk about for such a long times, seems to have receded a little and we are returning to the standards of the 1980s and 1990s.”

And this has been the issue all along. Nobody is denying that the earth has been in a warming cycle, what is questioned is the cause. The earth has been going through warming and cooling cycles for thousands of years.

Despite the fact, the earth is still pouring record amounts of CO2 into the atmosphere each year, there are obviously other natural factors impacting our climate aside from human activity.

In his 2007 Nobel prize acceptance speech, Al Gore predicted the Arctic ice pack would be gone by 2014 because of man-made global warming:

“The [arctic] ice cap is falling off a cliff, it could be completely gone in summer in as little as 7 years from now.” (Al Gore, 2007 Nobel acceptance speech)

In fact satellite images recorded by the University of Illinois’s Cryosphere project show the Arctic ice pack was actually growing, not shrinking, in the years leading up to 2014: 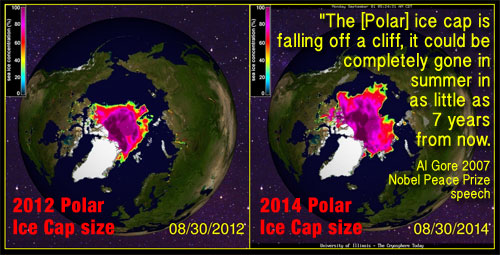 Satellite images showing the dramatic increase in the size of the Arctic Ice Caps between August 29, 2012 and August 29, 2014. Credit: University of Illinois Cryosphere project

The tide is slowly turning as many are wondering if the concerns about climate change, man-made or not, may be overblown. Unfortunately, this is not stopping politicians from taking advantage of the associated fear mongering to introduce carbon taxes.