Left: A model of the Traditional perception of the Tabernacle of Moses (Bibleplaces.com); Right: Andrew Hoy’s depiction of a six-story Tabernacle (Diagram Andrew Hoy)

You are probably familiar with drawings and even full-scale models (seen above on the left) displaying the Tabernacle of Moses.

When Moses was given the instructions for the Tabernacle, most envisioned it as a small rectangular tent constructed to house the Ark of the Covenant (Exodus 36:8 – 39:43).

This tent building served Israel for nearly 400 years, sitting for 300 years at Shiloh, until Solomon constructed the Temple. There was just a brief interlude when David constructed a tabernacle for the Ark of the Covenant (1 Chronicles 15:1).

But recently Andrew Hoy, a mechanical engineer from Milwaukee, Wisconsin, has challenged this traditional notion of what the Tabernacle looked like by suggesting it was instead a larger tent, nearly six stories high.

According to Breaking Israel News, Hoy’s journey started when he left the Lutheran church he was attending in America to study Hebrew at a Jewish seminary in Israel. He wanted to learn the original language to better understand the Old Testament.

As he looked at the passages describing the Tabernacle, he began to envision something much different from long-held opinions.

Traditional multi-layered view of the Tabernacle

Moses was instructed to create 11 large sheets of cloth, four cubits by 30 cubits in size, with rings on each end.

When they were told to join the sheets together, most traditionally thought they made one large rectangular sheet. This was then laid over a small rectangular building (seen right). However, this resulted in a multilayered covering leaving some sheets with un-joined edges.

Hoy wondered if instead these massive sheets were intended  to create a single layered and ultimately much larger tent.

As he worked on this new design, Hoy ended up with a  ten-sided decagon similar to the Mongolian Yurts.

One of the first things Hoy noticed is that the circumference of the lower layer was 314 cubits.The sheets when laid out were 315 cubits, but Israel was told to fold an end, leaving it 314 cubits. This is the mathematical π — pi that expresses the ratio of a circle’s circumference to its diameter. It is the mathematical representation of a circle.

Secondly, he noted is that there were very specific references on how much material could be used in construction. For example, they were told to use 100 talents of silver (1,100 pounds).

As Hoy studied the full-scale models made of the Tabernacle, he saw they used more wood and silver to secure it on the outer fence than the Scripture allowed.

Rather than using the wood for large posts secured in the ground with  heavy silver foundations, he believes the silver and brass were intended for the struts forming the dome’s inner structure over which the tent was laid.

Hoy then used a computer program to create a tent and fence that meticulously met both the Biblical quantities and descriptions while at the same time followed engineering principles.

This new Tabernacle ended up being six stories high, a much more imposing structure than traditionally envisioned. As Israel camped around the large tent, it would be visible to nearly every one, no matter how far back they were.

Overlaying Hoy’s design of the Tabernacle over the traditional view. Source: Andrew Hoy

According to Hoy, similar to the Mongolian Yurt, the Tabernacle’s rounded shape would stand up to the winds better than a rectangular construction.

Hoy’s perception of the Tabernacle is unique and will certainly challenge many long-held perceptions of what it actually looked like. 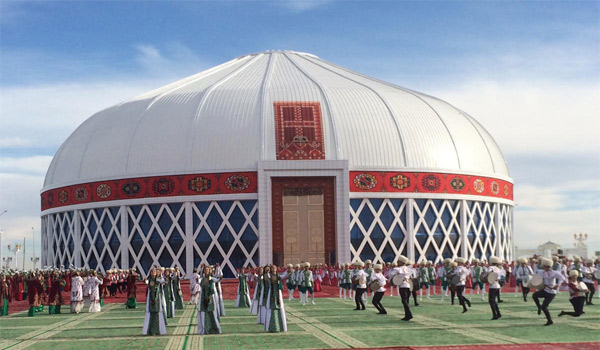