I know it’s a bizarre headline, but I am not the one suggesting it. The statement was made by England’s Lord Christopher Monckton. He believes the recent electoral defeat of Canadian Prime Minister Stephen Harper could pave the way for a one-world government.

Now before you jump to the conclusion that Monckton is some type of flake, I would like to tell you a bit more about this English Lord.

Monckton is the Third Viscount of Benchley. He currently serves as a policy adviser to the Science and Public Policy Institute. Over the years, he has served as an adviser to English Prime Minister Margaret Thatcher and in 1986 advised Thatcher to investigate the influence of CO2 on earth temperatures. This led Thatcher to set up the Hadley Centre for Forecasting. 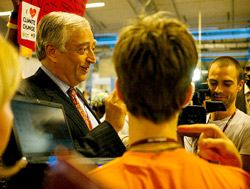 Monckton has since changed his mind about man’s influence on Global Warming and spends his time exposing the error that man is influencing global temperatures.

He is an expert on Global Warming and has been called four times to testify on the issue before the U.S. House of Congress. He has spoke at seven of the UN’s Global Warming conferences including Bali, Copenhagen and Rio. He has given lectures at universities on the subject and written dozens of articles for newspapers, magazines and Scientific Journals.

In an article on Lifesitenews, Andrew Smith reports on comments Monckton made in September 2014 in Brisbane, Australia prior to Canadian Prime Minister Stephen Harper’s defeat in the October 19, 2015 federal election.

Monckton was concerned that if Harper was defeated in the 2015 election it would pave the way for the formation of a one-world government.  And oddly there may even be a Bible passage that supports Monckton’s opinion to some degree.

Though I don’t believe Monckton is a Christian, he nevertheless sees forces pushing the earth towards a one-world government hinted at it in the Bible as an end times event.

Monckton believes pressure is building to have countries sign a treaty legally binding them to reduce carbon emissions at the 2015 Paris Climate Conference to be held November 30 to December 11.

He is concerned such a treaty would cause countries to cede some of their national sovereignty to the UN.

Though the UN is using global warming to justify the treaty, Monckton does not believe reducing CO2 emissions is the real reason for it. He said:

“It has nothing to do with man’s impact on the weather.  It has everything to do with establishing the socialist international at the heart of the UN and making every nation bow the knee to this new dictatorship, and the climate is merely a fig leaf to cover what they are trying to do.”

The United Nations has tried unsuccessfully to bring about such binding treaties at global warming conferences held annually for the past 21 years.

There have been a few governments primarily in Europe and more recently American President Barack Obama that have been pushing countries to accept harsher environmental policies that would raise taxes and destroy economic development and some suggest put the UN in the driver’s seat.

During these earlier attempts, Harper has been one of the lone voices to stand up to this pressure and Canada’s stance has emboldened others to resist.

The other government leader standing up to the UN was Prime Minister Abbot of Australia. However, his party removed him as leader in 2014 after a massive negative media and social media campaign.

Monckton said if Harper was defeated, the UN may finally be able to bring about binding treaties at the upcoming climate conference. Monckton points out that the Kyoto Protocol had an escape clause, but the Paris treaty will not.

Canada’s new Prime Minister Justin Trudeau will be attending this year’s climate conference and has invited all of Canada’s premiers to join him. Trudeau is leader of the Liberal Party which was also the same party that signed Canada on to the Kyoto protocol.

So what evidence does Monckton have to support this view?

He cited a statement by Sir David King before an Environmentalist Committee in Britain’s House of Commons in May 2014. King serves as William Hague’s United Kingdom climate change ambassador. According to Monckton, when asked by the committee if countries were ready to sign on to the harsher realities demanded by a global warming treaty, King replied:

“Oh, yes, but there are two stand-outs. One is Canada, but we don’t worry about Canada. They’ve got an election in the spring of 2015 and we and the U.N.  will make sure that the present government is removed.”

This is just Monckton’s opinion and that does not mean he is correct. I have no idea if Stephen Harper’s defeat will pave the way for a one world government or if a climate treaty would be the beginning of it.

But Monckton’s assertions reminded me of an interesting class I had at seminary decades ago taught by one of my favorite teachers, Dr. John Dahms. The class involved a verse-by-verse study of the epistles written by the Apostle Paul.

Dahms was an old school theologian who spent years studying the Bible in its original languages. We were going through Thessalonians and spent  the class discussing verses in 2 Thessalonians.  The passage  talks about the restrainer that is holding back Satan from establishing his one world order and setting up the antichrist.

6 And you know what restrains him now, so that in his time he will be revealed. 7 For the mystery of lawlessness is already at work; only he who now restrains will do so until he is taken out of the way. (2 Thessalonians 2:6-7 NASV)

The antichrist would only be revealed when God allowed it. But a verse in the Book of Daniel says one of Satan’s goals is to change the times and seasons — to move up the time-table if possible.

25 He will speak out against the Most High and wear down the saints of the Highest One, and he will intend to make alterations in times and in law; and they will be given into his hand for a time, times, and half a time. (Daniel 7:25 NASV)

Because the Apostle Paul does not tell us who the restrainer is, there has been much debate who that might be. Most commentators believe the restrainer is the Holy Spirit and certainly this would be an obvious choice as He would have the power to restrain Satan.

However, as we studied this passage Dahms was not convinced this was the case. The reason is some of the gender used to describe the restrainer was the neutral “it” not personal like “him.” Since the Holy Spirit is a person, not an “it” or Star Wars’ “force,” Dahms concluded that the restrainer could not be the Holy Spirit.

Dahms believed the restrainer was in fact “government.” God was using national governments to restrain Satan from setting up his one-world government.

So if there is a government in place resisting Satan’s plans, it would need to be removed.

Whether this was the case for Stephen Harper I do not know.

But this I do know, if Dr. Dahm’s interpretation of 2 Thessalonians is correct it is one more reason why we must pray for those in authority (1 Timothy 2:1-2).

UPDATE: In what is being described as “unprecedented” and “historic,” it is being reported today Poland is in the process of electing a conservative government opposed to any Climate change treaty. It is expected the country’s Law and Justice party will win a slim majority. If this happens, it is predicted this could disrupt the UN’s plans for a climate treaty in Paris.