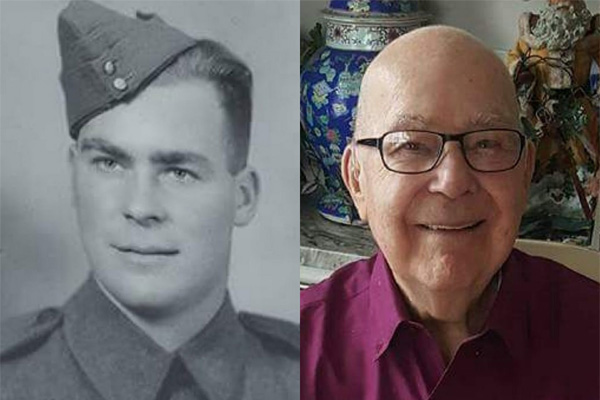 Grandpa as a young man in the Canadian army and a photo a month and a half before he died.

[by Ian Smith] Yesterday, the world lost a strong, brave and caring gentleman. Raymond Smith was my grandfather and I  respected him tremendously. He was a World War II veteran and assisted in the liberation of Holland.

Another notable instance from the war was his participation in The Battle of The Bulge. This was the last major offense by the Nazi German forces. It took place from December 16, 1944 till January 25, 1945.   Meaning he spent Christmas cold, tired and faced with the possibility of losing his friends or his very life. Nobody should have to spend Christmas like that and he fought to make sure that no one else would.

A couple of years ago he needed to have surgery to remove a large portion of his large intestine due to cancer. Unfortunately this was around Christmas again. Since this was major surgery on a man in his early 90’s it was fairly serious. As many family as possible came and visited with him while he was confined to the hospital. One thing that stuck with me while we were talking was how positive he was during this time.

He had every right to be bitter about being in the hospital over the holidays. Having to eat soft food such as yogurt instead of turkey. Or needing to wear a hospital gown instead of one of his spiffy dress shirts. Yet he was still cracking jokes and constantly smiling. He even quipped, “This is my second worst Christmas. The worst one was when we were fighting the Germans”.

His positivity in the face of negative circumstances has stuck with me since. One of my favorite songs goes “You taught me the courage of stars before you left. How (their) light carries on endlessly, even after death.” My grandpa’s light will carry on. His lesson of positivity will continue to shine on. I will make sure of that. This man led a life of significance. I’m proud to have known him and just as proud to talk about him. Good bye Raymond Smith, you will be missed.