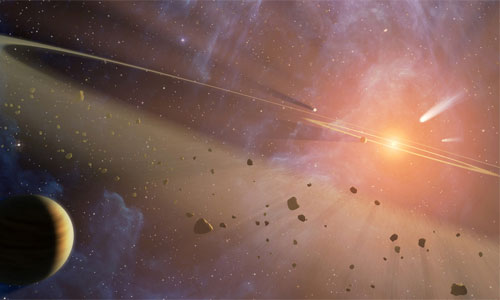 What was Jesus talking about when He spoke of “terrors from heaven?” Photo: NASA’s Marshall Space Flight Center/Foter/CC BY-NC

[by Dean Smith] NASA has a program called the Near-Earth Object Wide-field Survey Explorer (NEOWISE) which, using a satellite with infrared telescopes, scours space looking for asteroids that might prove dangerous to earth.

According to an article in The Register, NASA launched the satellite in 2009. It shut down the main telescope in September 2010 when it ran out of frozen hydrogen necessary to keep it cool. NASA put the remaining three telescopes into hibernation in February 2011.

In December 2013, NASA reactivated the three working telescopes. And once again they began scanning the heavens above earth looking for lethal asteroids — anything in excess of 110 meters in size and within 7.5 million miles of earth.

Asteroids differ from meteors in terms of size. Though there is no agreed upon diameter that transforms a space rock from meteor to asteroid status, asteroids are large enough to blast through our atmosphere without burning up with potentially devastating results. Many are big enough to have their own gravity field and some have moons orbiting them.

Within six days of the restart, NEOWISE found 2013 YP139 — an asteroid capable of catastrophic damage if it hit earth.

After a year of searching, NEOWISE has so far discovered 8 previously unknown asteroids, ranging in size from 120 to 300 meters. Each could cause catastrophic damage.

To put it in context, the asteroid that exploded over Chelyabinsk, Russia on February 15, 2013 was only 19 meters in size and its explosion was 20 to 30 times more powerful than Hiroshima. Thankfully, it detonated high in the atmosphere, but even so, 1,000 people were injured by shattered glass due to shock waves so powerful they circled the earth twice..

In addition, NEOWISE discovered several smaller asteroids (32 so far) capable of destroying cities. It is about 20% the way through its third scan.

NEOWISE is not the only group looking for asteroids and there has been a few articles recently on the potential dangers associated with asteroids — perhaps for good reason. The Bible suggests during the end times, the earth will suffer multiple asteroid/meteor hits.

Jesus said “And there will be terrors and great signs from heaven” (Luke 21:11 NASV). He used two words to describe the event originating from heaven — they would terrorize and they would be a sign. The Greek word for terror specifically means “objects of terror.” Whatever these are, the plural indicates there would be many of them and they would cause fear suggesting damage and death.

Jesus also said these “objects of terror” were a sign. But what were they a sign of?

The Book of Revelation (a vision God gave the Apostle John about the coming end times) may provide the answer to this question. In Revelation 6:21, John says the opening of the Apocalyptic sixth seal by an Angel of God would be marked by several signs (such as a blood moon and a great earthquake).

One of the signs also involved “stars falling from heaven.” John uses an interesting analogy to describe the event. He compared it to unripe figs slamming into the ground when a fig tree is hit by a mighty wind. There would be multiple hits that would strike terror in people’s hearts.