Marcus Johnson, 23, was an undrafted free agent when he signed with the Philadelphia Eagles in 2016. He was injured early in his professional tryout and missed most of the training camp. He was waived, but then added to the Eagle’s 2016 practice roster.

Johnson played for the Texas Longhorns in college. His stats were not outstanding. But this year, he impressed enough to make the Eagles’s 53-man roster. 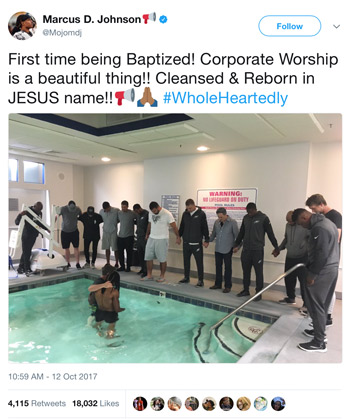 Just before the Eagles’s game against the Carolina Panthers on October 12, 2017, a game the Eagles won 38-23, Johnson sent out a photo and a tweet of him being baptized at the hotel pool where the team was staying.

Johnson’s caption for the photo read:

CBS reported on Johnson’s water baptism and commented on the photo that showed several players gathered around the pool holding hands as the wide receiver was baptized.

The teammates with their heads bowed seemed to be praying. This gathering included black and whites.

The Philadelphia Eagles have several sincere Christians on the team including its Quarerback Carson Wentz who is very vocal about his faith. Wentz has repeatedly said that he plays for an “audience of one” meaning he plays to the glory of God.

Since the early church, water baptism has been an important part of the Christian faith. It symbolizes being baptized into Christ’s death (Romans 6:3-7).

But perhaps the most striking feature of baptism is that it functions as our passport that we now belong to a new nation — the kingdom of God.

27 For all of you who were baptized into Christ have clothed yourselves with Christ.28 There is neither Jew nor Greek, there is neither slave nor free man, there is neither male nor female; for you are all one in Christ Jesus. 29 And if you belong to Christ, then you are Abraham’s descendants, heirs according to promise. (Galatians 3:27-29 NASV)

In this passage, the Apostle Paul says that in baptism there are no national identities (neither Jew or Gentile). All need to be baptized, even the Jews. We are all equal before God.

But I believe it is intended to not only break down the barriers between Jews and Gentiles, but also between Gentile races. We are all now one in Christ. We are all Abraham’s descendants.

The Apostle Paul emphasizes this point when he wrote:

19 So then you are no longer strangers and aliens, but you are fellow citizens with the saints, and are of God’s household, (Ephesians 2:19 NASV)

There should be no racial divides in the church. We are all brothers and sisters in Christ. The Kingdom of God is now our nationality and water baptism symbolizes this new unity in Christ.

In a 2016 article entitled, Members of the Eagles find common ground through spiritual devotion, ESPN pointed out how the faith of several members of the Philadelphia Eagles is breaking down the racial barriers between team mates.

This is what the Holy Spirit wants to do. He wants to unite the races in the church.

But as important as baptism is we do not need it to be saved, as salvation comes from faith alone. We see this displayed on the cross, when the repentant thief confessed his faith in Christ and Jesus said that the unbaptized man would join the Lord in paradise (Luke 23:39-43).

1 | An eye for an eye does not contradict loving your neighbour as yourself?