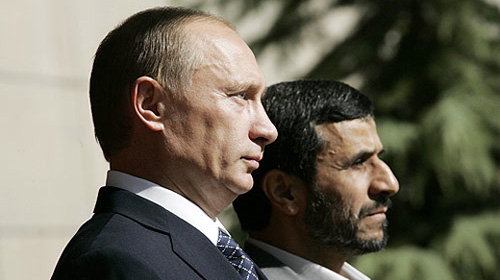 The whole world knows that Ukraine has been in turmoil for several months, and recently the Crimea region of Ukraine was occupied and annexed by Russia. Many Ukrainians have criticized other nations, because they have “helped” with only criticism and mild sanctions against Russia.

The pattern of aggression from Russia resembles Nazi Germany’s expansion at the beginning of World War II and there is real potential for the crisis to become a serious war. The situation is scary, and some Christians have wondered if this is the beginning of the end and if Vladimir Putin is the Antichrist.

So should we be afraid?

There are at least two things we should know:

God shows the common pattern for all rulers, including Vladimir Putin, who begin “conquering and to conquer” (Rev ch 6). Wars of expansion happen in four stages, and the same pattern applies to Russia.

Even those who don’t believe in God know this pattern is always true. It’s a popular theme in movies. Our nations, corporations, denominations, organizations, projects and Boy Scout troops are always close to corruption and failure. The study of business failures is called Darwinian Economics.

We know who we really are, and I know who I am. It’s easy to identify the corruption in this world, because we are experts on the subject. The greatest project in my life started when I saw the corruption of the world, in me. I eventually decided to step off the ride and start a new life, my personal Jesus project. I am a Christian because I didn’t like the corruption in me. If you are not convinced to follow Jesus, I recommend that you follow the news and read Revelation chapter six, near the end of the Bible. The truth can set you free. And the truth may be coming down on us soon.

77 | What to do with a strange flashback

72 | The SPI-B agency and the Spirit of Fear