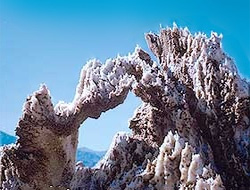 A salt pinnacle from the Devil’s Golf Course in Death Valley National Park, US. It was created after the evaporation of ancient lake: Wikipedia

In Mathew 5:13, Jesus calls His disciples “the salt of the earth.” Salt was a valuable product in early Israel. Among other things it was used as a food preservative — an important benefit in a culture lacking refrigeration. Salt was also used to increase the flavour of food.

In many ways, Christians play a similar role in culture — acting as a preservative. The moral decline of a nation is often a prelude to national collapse. A few grains of salt not only has the ability to enhance the flavour of food, but even a culture.

However over the past few decades, salt’s sheen was tarnished as medical organizations warned of the dangers of using salt. I always found this a bit puzzling considering Jesus’ analogy. Well it appears these warnings needed to be taken with a grain of salt.

In his article, Salt, We Misjudged You, New York Times writer Gary Taubes says the fear mongering on salt is not based on scientific evidence, but rather what Taubes describes as the theory of “biological plausibility” — meaning the warnings on salt sounded reasonable.

A 1972 study —  published in the New England Journal of Medicine — showed reduced salt consumption increased heart disease. This study was basically ignored at the time as medical organizations were just climbing on the anti-salt bandwagon.

An extensive Italian study published in 2008 concluded reduced salt intake by people suffering from heart disease actually increased their risk of heart problems. The study looked at two groups of people suffering heart disease. One group took 2,760 milligrams of salt and the other 1,840 mg. Hospital readmissions of the lower group were three times higher than the high salt group.

Taubes quotes Drummond Rennie — an editor of the Journal of the Medical Association — who sys “without any shadow of a doubt”  those calling for reduced salt “made a commitment to salt education that goes way beyond the scientific facts.”

But don’t take Taubes’ word for it. Others are coming to the same conclusion. The U.S. Center for Disease Control (CDC) released findings of a study analyzing research done on salt. The study undertaken by the Institute of Medicine stated lowering salt consumption to less than a teaspoon per day has no health benefit and may actually be harmful.