Three of the pottery shards from Arad Fortress revealing that even common people were capable of writing in ancient Judah. Photo credit: PNAS, Faigenbaum-Golovin et al

Throughout the Old Testament, there are many references to people recording historical events as they were happening.

Liberals of course have long disagreed with this. They believe writing was not widely in use during Biblical times and people wrote these stories long after they occurred. They then of course go the next step and insist these historical records and the people named in them were simply made up.

This meant Biblical books ranging from Deuteronomy to 2 Kings were written centuries after the events cited in them took place, despite the Bible treating them as eye-witness accounts.

Those Liberal views just came crashing down after researchers analyzed writing found on pottery shards discovered in a Jewish frontier fort named Arad, dated to 600 BC.

Researchers from Tel Aviv University used computer programs, often employed by forensics to compare writing samples and banks to verify signatures, to find out if the same person wrote them.

The research team was made up of a diverse group of people including archaeologists, physicists and mathematicians,

After they scanned the writings from 16 pieces of pottery, the group came to some stunning  conclusions.

The writing on the pottery shards were written by “at least” six different people. This ranged from a man named Malikiyahu, the fort commander, to a low-level soldier serving as a quarter master at the fort.

Though not written by best-selling novelists, all the writings showed proper grammatical structure and syntax of the ancient Hebrew language.

Most importantly, it revealed if a low-level soldier was capable of reading and writing, then there must be well established educational training in place for this to happen and it must have been in place for years.

According to the group, the writings detailed such things as troop movement and how much the fort paid for provisions.

In their report published in Proceedings of the National Academy of Sciences, one of the co-authors of the study, Israel Finkelstein, from the University of Tel Aviv, said:

“We’re dealing with really low-level soldiers in a remote place who can write. So there must have been some sort of educational system in Judah at the time.”

He added that it was amazing, “that in a remote place like this, there was more than one person, several people, who could write.”

This meant written records of Judah’s fall to Babylon were eye-witness accounts just as the Bible said they were. Liberals have typically believed the events surrounding the siege and fall of Jerusalem to Babylon which took place between 587 BC to 586 BC were written about 300 years later, around 200 BC. 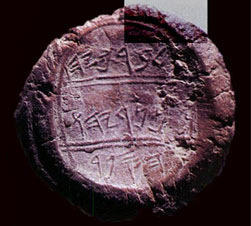 The prophet Jeremiah who was in Jerusalem during the Babylonian siege and was prophesying about the city’s destruction used a scribe named Baruch to record his prophecies.

32 Then Jeremiah took another scroll and gave it to Baruch the son of Neriah, the scribe, and he wrote on it at the dictation of Jeremiah all the words of the book which Jehoiakim king of Judah had burned in the fire; and many [a]similar words were added to them. (Jeremiah 36:32 NASV)

Archaeologists have even found a bulla with Baruch’s name on it confirming his existence. The bulla also has what was probably Baruch’s fingerprint embedded in the clay. People used seals to imprint their bulla (official stamp), usually in clay or wax, on a document to verify they wrote it.

The study showed that writing was wide-spread in ancient Judah and that even commoners knew how to write legitimizing the eye-witness accounts repeatedly found throughout the Old Testament.