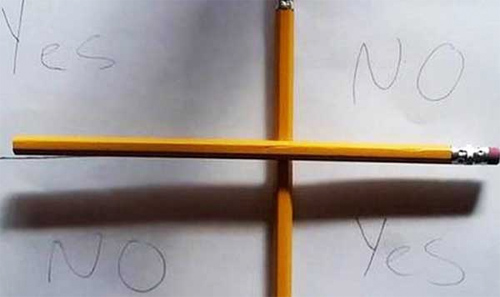 [by Dean Smith] A game exploded on the internet on Monday, circulating through popular social media sites such as Twitter and Facebook, encouraging teens to play a game patterned off a Ouija board. It involves conjuring up a Mexican demon called  Charlie.

According to reports 100s of thousands of teens are taking up the challenge referred to on Twitter as the “CharlieCharlieChallenge.”

The ritual involves writing the words ‘yes’ or ‘no’ on the corners of a piece of paper.

A pencil is laid down vertically along the center of the page and a second pencil is then balanced horizontally on top forming a cross.

The person then asks “Charlie, Charlie, can we play.” If the balancing pencil moves into a corner of the page with the word ‘yes,’ it indicates a demon is present and the teens can ask it other ‘yes’ or ‘no’ questions.

Teens are encouraged to summon the demon, and then post their results on-line. Some are even videoing their conjuring attempts and uploading them to YouTube.

Other teens are using the game to answer questions, writing possible answers in the four corners of the page, and having the pencil point to the answer.

Of course, the pencil’s movement can easily be caused by jarring the table, an un-level base or even a poorly balanced top pencil.

While many are mocking the game, others are taking it more seriously and some have reported odd things happening when they play it.

However, those familiar with Mexican folklore suggest that no such demon called Charlie actually exists.

But even if it doesn’t, the demonic realm is real and the challenge opens a person to this spiritual realm. Unfortunately, once opened it is a door that is not easily closed and it is also one that can be used at a later date.

There has been an increased interest in the occult in recent years. Last Christmas, Google reported that Ouija boards were one of the trending Christmas gift searchers in 2014.

The board has a series of letters and numbers on it and as well such words as ‘yes’ and ‘no’.  People put their hand on a heart-shaped device and ask spirits to guide their hands to the letters or words on the board to answer questions.

However, when you are dabbling with the occult, these so-called innocent parlor games have the potential to display a dark side. I wrote a story on the conversion of Tony (Anthony) Greve who played guitar for a popular alternative-rock band Pop Evil. He joined the band in 2007 and left in 2012 after his conversion to Christ.

Anthony shared a story on how he cast a demon out of his brother who was possessed while playing on a Ouija board.

It started on Anthony’s flight home to visit his family. Anthony, who was still with the band, read the story in Mark 9 on how the disciples were unable to cast a demon out of a boy.

Confused, Anthony initially thought God was saying he had a demon. He shared this with his brother, who suggested they play a Ouija board to get an answer. Anthony agreed, but the game took a dark turn. Anthony said:

“All of sudden it [the Ouija board] began to work. And something began to feel terribly wrong. And in that moment, my brother cries out and this thing enters his body. And it just kind of flies him back on the ground. I remember stepping back and just being terrified. He turned and looked at me. I had never experienced that much hate in all of my life to see this thing looking at me through my brother.”

Remembering the passage he had read on the plane, Anthony felt a surge of power, took authority, and cast the demon out in Jesus’ name. Similar to what happened in Mark 9:26, Anthony’s brother convulsed as the demon was forced to leave.

There was also an instance where teens were hospitalized after playing on a Ouija board and another story reported on bizarre events associated with the game.

In his letter to Timothy, the Apostle Paul wrote how Holy Spirit warned during the end times, people would be be seduced by demonic spirits.

“But the Spirit explicitly says that in later times some will fall away from the faith, paying attention to deceitful spirits and doctrines of demons.” (1 Timothy 4:1 NASV)

Is the increased interest in Ouija boards and the ‘Charlie Charlie Challenge’ simply a sign of the times?

13 | What is so mysterious about an Egyptian Guard?

12 | Does God still speak to us through dreams and visions?

8 | Can Christians have an unhealthy fear of the demonic? An interview with Wayne Johnston

7 | Spiritual warfare: How Satan attacks us from the spiritual realm

6 | The Gift of Hospitality, an interview with Kate Fisher

5 | What does a dog insult have to do with what really sunk Peter?