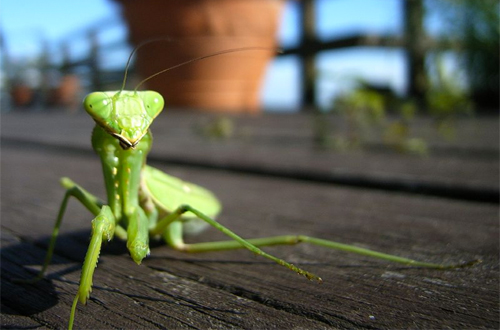 [by Earl Blacklock] From his childhood, Jean Henri Casimir Fabre was a gifted self-taught observer of nature whose extensive research and writings on insect and arachnid anatomy and behavior set the highest standard for scientific inquiry.

Fabre won a scholarship to a school for teachers, where he taught himself Latin and Greek. While studying a text on entomology, he discovered an error. The book said that the hunting wasp kills beetles before feeding them to its larvae. Through careful observation, Fabre saw that the wasp instead paralyzes its prey, delivering them to its young still alive. From that observation, Fabre learned the principle that in science, all authority must be questioned.

A teacher of biology at a high school for boys in Avignon, Fabre devoted his free time to the study of insects and arachnids. He would spend hours after school studying and recording the drama of the lives of creatures that lived nearby, from the way they would signal their presence to how they killed their prey.

He shared his passion with his students, and opened up his classes to girls. That got him into trouble with some clergy who believed that teaching biology to girls corrupted their innocence, and they forced him to leave his position. Scandalized by the controversy, his landlady evicted him.

Without a job or home, Fabre turned to his friend, the English philosopher John Stuart Mill, who shared his  love of biology. Mill staked him with a loan that let him move his wife and five children to a house near Orange. From there, he began to study in earnest the insects, arachnids, and plant life of Provence.

In the following years, he meticulously recorded his observations. Then, forty years after his research began, he published them in an enormous ten volume collection called the Souvenirs Entomologiques.

The scientific community was astounded and Fabre acclaimed for the depth of his research. Charles Darwin called him “The Incomparable Observer” – a great irony, since Fabre rejected Darwin’s theory of evolution.  On his 87th birthday, the powerful and the famous gathered to shower Fabre with titles and honors as he received the recognition that was his due.

To those who wondered why he would spend his entire life in the study of entomology, Fabre had this to say: “The insect does not aim at so much glory. It confines itself to showing us life in the inexhaustible variety of its manifestations; it helps us to decipher in some small measure the obscurest book of all, the book of ourselves.”

The Psalmist said “How many are your works, O Lord! In wisdom you made them all; the earth is full of your creatures” (Psalm 104:24). Fabre saw in the miniature world he studied a sense of divine order and purpose, and his work revealed the complexity of that creation. At the end of his life, when asked whether he believed in God, Fabre responded “I say not merely that I believe in God –I can even say that I see Him.”