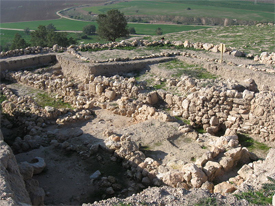 When a Philistine army invaded Judah, the Israeli army led by King Saul intercepted the Philistines at Socoh in Judah.  As the two armies faced each other there was the usual chest pounding.

The Philistines sent out Goliath to challenge any Israeli soldier to one-on-one combat (1 Samuel 17). Goliath was a “champion” of the Philistines (v 4) and according to the Biblical record stood nearly 9′ 9″ and his body armour weighed 80 kg or about 160 pounds. He was there to intimidate his opponents. It’s what giants do best.

Most liberal theologians discount the story of Goliath’s defeat by a young shepherd boy with a sling, as little more than a myth.

However, Israeli archaeologist Dr. Aren Maeir — from Tel Aviv Bar-Ilan University — put these notions to rest when he announced finding Goliath in 2005.

Though Maeir didn’t exactly find a giant body, minus a head, he did find a shard of pottery with the name Goliath etched on it from the Tel es Shafi mound — the site of an ancient Philistine city of Gath located 21 miles west of Bethlehem. Gath is the home of Goliath (1 Samuel 17:4  and the city Joshua specifically labeled as housing giants (Joshua 11:22).

In its news release, Bar-Ilan University stated, “The discovery is of particular importance since the Bible attributes Gath as the home of Goliath. ‘Gath of the Philistines,’ was one of the major cities of the Philistines, the well-known arch-enemies of the Israelites in the Biblical text.”

“The archaeological find may also be seen as the first clear extra-Biblical evidence of the well-known Biblical story of the battle between David and Goliath,” the release added.

An inscription found on a small piece of reddish colored pottery had the words “Alwat and Wlt” written on it in “Proto-Canaanite” lettering — the Hebrew equivalent of Goliath. When the Hebrews heard the name Goliath they translated so it had the same etymological sound in their language.

Stunned by his discovery, Maier circulated the shard to a number of experts who confirmed this finding. Aside from its Goliath inscription, the shard was also the earliest known form of Philistine writing.

In an interview with the Jerusalem Post, Maeir said he does not believe this is a reference to the Goliath of the Biblical record stating he dated the shard 100 years after the infamous confrontation. According to Maier, the Biblical account took place around 1,000 BC and the shard is from 900 BC. However, archaeological dating is far from an exact science.

Maier described it as “a ground breaking find,” as it was evidence that this account “is not some later literary creation.” Since the first discovery, they have found other shards with Goliath’s name on them.

Pottery had names etched  on it for a number of reasons. First it often indicated ownership. Secondly, it took on the form of hero-worship. Today, people buy football jerseys with the name and number of their favorite player emblazoned on it. Back then they did the same thing with pottery using it to display the heroes and gods of their culture.

If the name is later, as Maier suggests, it was common for parents to name their children after relatives and famous people in their culture. At the very least, the small piece of pottery tells us the name was in common use during this period.