In an ironic play on words, an obscure Biblical figure — Zechariah the son of Benaiah — finds himself in the limelight, again.

The name Zechariah means “God remembers,” and because of a recent archaeological discovery we are all remembering this little known man from the annals of Bible history, mentioned once in 2 Chronicles 20:14-15.

Then in the midst of the assembly the Spirit of the Lord came upon Jahaziel the son of Zechariah, the son of Benaiah, the son of Jeiel, the son of Mattaniah, the Levite of the sons of Asaph; and he said, “Listen, all Judah and the inhabitants of Jerusalem and King Jehoshaphat: thus says the Lord to you, ‘Do not fear or be dismayed because of this great multitude, for the battle is not yours but God’s. (NASV)

From the text, we know he was a levite — of the priestly tribe.  His claim to fame:  He was father of the prophet Jahaziel who gave a prophetic word of victory to King Jehoshaphat on a looming battle with an invading Moabite army.

Now 2,700 years later,Zechariah finds himself thrust onto the national stage, one more time.

Israeli archaeologists are digging in a spur of land jutting south of the Temple Mound located in an area of Jerusalem called the “City of David,” which represents the oldest settled area in Jerusalem. Here they discovered a layer containing an incredible amount of  artifacts such as figurines, lamps and pottery.

On one shard encompassing part of the the rim of an ancient pot, they found inscribed what appears to be the name “Zechariah son of Benaiah.” The shard was dated to being likely from the 8th to 7th century B.C. putting it somewhere between King Hezekiah’s reign and the fall of Jerusalem during King Zedekiah’s rule. 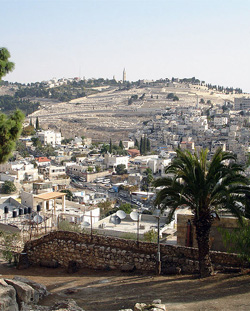 City of David, Jerusalem with the Mt of Olives in the background: Wikipedia/Joe Freeman

The inscription — written in Ancient Hebrew — does not have vowels. In its earliest form, Hebrew used vowel points instead of actual vowels and it was not uncommon to simply omit the vowels points.  Though the first letter was partially damaged, there was enough remaining to give an educated interpretation. Transliterated into English the full phrase reads, “rhyu bn bnh” or “…riah the son of Banah.”

Accounting for the missing Hebrew vowels and adding the missing letters Z and K, archaeologists said a possible interpretation is  “Zechariah, son of Benaiah.”

The name appears to have been part of a longer description which could have included Zechariah’s address. What makes it unique is the wording was etched into the pottery prior to firing.

“It is difficult to say with certainty what the specific use of the bowl was. Usually bowls are very typical and common vessels found, used similarly to plates today, as serving dishes to eat from. However, the name inscribed on the bowl prior to its firing (the final process of making the bowl) signifies that it may have been made for a specific intention, such as the presentation of a gift or offering to someone, where the name would reflect either the recipient or more likely the presenter.”