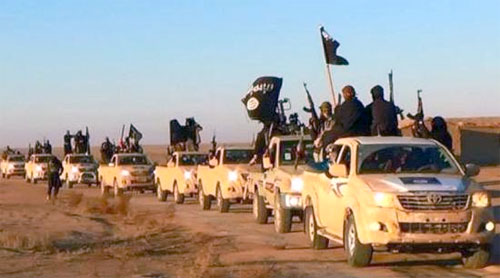 Isis succeeded because they had a plan.

A few months ago, Isis, the Islamic State in Syria was a terrifying organization. In Syria, they murdered Christians and crucified their fellow Muslims. By some accounts, they killed their victims first and then put dead bodies on crosses, if that helps.

Recently, Al Qaeda, the leader among Muslim extremists denounced Isis and refused to work with them. They were too bad to run with the bad boys, terrorists to the terrorists.

More recently, Isis attacked Iraq and conquered a third of the country. Now they control a national territory in Syria and Iraq with vast oil wealth. Also they inherited American weapons when the Iraqis dropped everything and ran. Billions in American investments are now in the hands of their worst enemies. I believe it is only a matter of time before attacks are launched outside of the Middle East; and that puts you and me at risk.

I don’t need to say these people are violent and dangerous, they will tell you that. They sincerely believe God’s true followers must conquer the world violently and force everyone to submit, or die. They call it Jihad. For them, murder is the will of God, and now they have the resources to act. They are missionaries with guns.

This is an astounding change in world history, and I can tell you how it happened.

A strain of violent hard-core believers has existed among Muslims for centuries, with little success. Recent wars in Iraq and Syria gave Isis opportunities to act out their beliefs, and it is clear they planned carefully in those small arenas. When Iraq weakened internally, they rushed across the border and almost conquered the whole country. ‘Good fortune comes to those who are prepared’, and ‘they made their own luck.’

In project management, planning walks through all parts of the project, before it starts, and I am sure Isis did that. Success is just acting out the plans.

Among the Christians I know, people mostly plan for their next vacation.

Jesus told about a King who instructed his servants to “occupy” until he returned (Luke 19:13). I think Jesus was talking about himself, and us. There is so much for us to do, and time is running out. The astounding success of the most vicious people on Earth shows how big our good work could be.

The first Christians started with 11 leaders and a few others, and redirected world history; and we have the same assignment.

So what are you planning? What good work should be done by somebody? Can you do it? Possibly not. Can you plan for it? Yes, you and me both. The opportunity to act will come some day.

“Go into all the world and preach the gospel to all creation. Whoever believes and is baptized will be saved, but whoever does not believe will be condemned. And these signs will accompany those who believe: In my name they will drive out demons; they will speak in new tongues; they will pick up snakes with their hands; and when they drink deadly poison, it will not hurt them at all; they will place their hands on sick people, and they will get well.”

After the Lord Jesus had spoken to them, He was taken up into heaven and He sat at the right hand of God. Then the disciples went out and preached everywhere, and the Lord worked with them and confirmed his word by the signs that accompanied it.” (Mark 19: 15 to 20).