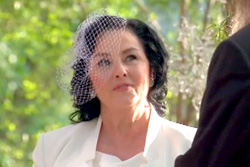 Miss Kay is best known for her role as the family matriarch in the popular Duck Dynasty show  — the top reality TV program in the U.S.

She along with her her husband Phil Robertson started ‘Duck Commander’ — a duck call manufacturer —  which became the basis for the show. Most of the men in the family sport full facial beards and come with a redneck edge.

Through the show we see a strong sense of family and faith displayed by all members of the Robertson clan.

But there is a dark side to their remarkable story.

Miss Kay was a featured speaker at a fund raising event called “Night of Ducks and Hucks” where she spoke about the other side of the Duck Dynasty story.

The first ten years of her marriage to Phil were in Miss Kay’s words “horrible.” Though Phil is often embarrassed when the family talks about their early struggles, Miss Kay says they share it to show there is hope and healing for broken families through Jesus Christ.

In a nutshell, Phil was a heavy drinker and verbally abusive.

Miss Kay remembers the transforming moment that started the Robertson family on the road to recovery.  One day in utter frustration, she locked herself in the bathroom and cried. She wanted to die and thought about suicide.

Three of her sons were outside crying and pleading for her to come out.

Her oldest son Alan, then 10, spoke through the door saying, “Momma, don’t cry anymore, God’s gonna take care of you.”

After Alan pleaded a second time, Miss Kay said she sensed God say to her, “I’ve got plans for you.”

The next day Miss Kay visited a preacher and accepted Christ into her life. Though nothing immediately changed at home, she now had the Holy Spirit with her and she made the choice to persevere in their marriage.

“I did not give up because God told me to fight for that marriage, and I did and I made it through,” said Miss Kay.

She told her sons that as a family they needed to pray for Phil to accept Christ. They prayed. God moved and in time drew Phil into the Kingdom of God and set the family on a path to a very unusual destiny.

It is a powerful and humbling testimony of what God can do with a broken family.  It’s encouraging to see Phil’s struggle with this testimony. The Apostle Paul spoke about his “thorn in the flesh” that God gave to keep him humble (2 Corinthians 12:7-10). It would appear Phil has his own special thorn — which may be an indication of God’s plans for this family.