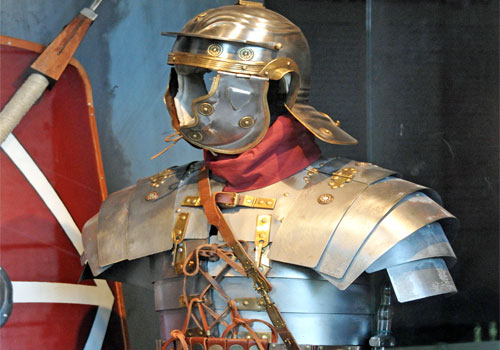 What type of attacks does our spiritual armor protect us from? Photo: Foter/Flicker/archer10 (Dennis)

I was mowing the lawn in our backyard, when a memory popped into my mind of a stupid thing I had done years earlier. I had previously asked God to forgive me, but here it was alive and well condemning me.

Where do these thoughts come from?

For a clearer insight, we need to study an incident that occurred along the banks of the Tigris River in the ancient realm of Persia around 600 BC.

How the spiritual world interacts with the physical world

The book of Daniel provides a captivating insight on the interaction between the spiritual and physical realm. In chapter 10, an Angel of God was dispatched to Daniel in response to a prayer he had made in verses 1 – 3.

When the angel arrived, Daniel along with some other Israelis was relaxing along the banks of the Tigris river. The angelic visit sparked a vision through which Daniel physically saw God’s messenger. During such visions, I believe God pulls back the veil providing humans a rare glimpse into the spiritual realm.

In this unique meeting, Daniel experienced a number of unusual manifestations such as the shakes and falling flat on his face speechless.

However, because of this vision, we have our first example of a split screen TV. On one screen, we see Daniel’s unusual manifestations and on the other the corresponding angelic activity that caused it.

V 8: The angel appeared – Daniel lost his strength. Though the men with Daniel never actually saw this angel (v 7), they experienced a holy terror and fled for their lives. The loss of strength probably prevented Daniel from joining them in their flight.

v. 9: The angel spoke – Daniel fell into a deep sleep.

Without the vision, these manifestations would still have occurred and most would have considered Daniel’s behavior as bizarre. But these angelic touches and words coming from the spiritual realm were the cause.

What is even more intriguing is the angel’s words caused different manifestations. Different words produced differing results. If the word courage causes us to be strengthened, can the word fear terrorize us?

So why is this important in teaching on the armor of God?

Well, Satan and his lackeys are fallen angels and when they rebelled against God they didn’t suddenly lose their angelic abilities. Now instead of using this capacity for good, Satan uses it for evil — through touches and words emanating from the spiritual realm.

The Breast Plate of Righteousness

Incidents like this may be one of the reasons, the Apostle Paul exhorts believers in Ephesians 6 to put on the armor of God.

One piece Paul encourages believers to put on is the “Breastplate of Righteousness” (Ephesians 6:14). It is necessary equipment to protect us from the very personal spiritual attacks Satan can afflict on the believer by a simple touch or word.

In the Roman army, the breastplate covered the vital areas of the body from the neck to the thighs. It was made up of plates of metal that allowed some flexibility but still guarded the body from the sword or spear.

But in the believers case, it is invisible spiritual armor to protect against unseen touches and unheard words.

This person struggled to answer this question because so often we confuse sanctification with righteousness. The Bible says that because of Christ’s work on the cross we are completely righteous in God’s eyes (Rom 1:17; 3:22; 5:19). We can’t be any more righteous than we are this very moment.

This differs from sanctification through which the righteousness we already have becomes a reality in our lifestyle.

Many of us struggle to believe this. This friend was fighting Satan on his terms, not God’s terms. Satan had the tactical advantage because she was trying to define her righteousness by how she lived. It was a battle no one could win.

As Christians, we must believe who we already are in Christ.

The amour of God exists in our heart and in our mind. As we choose to believe what the Bible says about us, God’s armor is securely strapped on us. We may never see it, but in the spiritual realm, its strength and brilliance shines as a beacon warning the hordes of hell that a Christian warrior has entered the field of battle.

With this armor firmly attached, Paul tells us to engage the enemy “with all prayer and petition pray at all times in the Spirit, and with this in view, be on the alert with all perseverance and petition for all the saints” (Ephesians 6:18).

36 | Who are the two end-times witnesses?