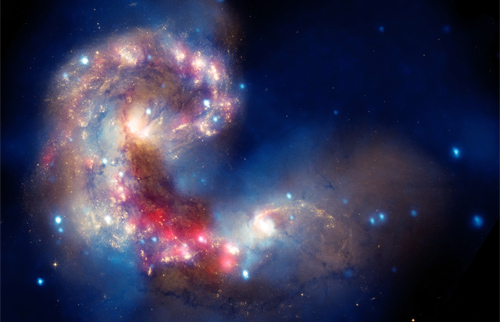 [by Dean Smith] It is a strange irony. While on one hand atheists claim they can’t believe in God because there is no scientific evidence to prove His existence, yet polls show the majority of atheists believe in aliens even though there is no scientific evidence to prove their existence. Oh sure, there are YouTube videos of people claiming aliens abducted them for experimentation, but that is hardly evidence. In fact, in a documentary produced by the Discovery Channel, famed atheist and physicist Stephen Hawking expressed concern about an advanced alien society plundering earth’s resources along the Hollywood theme of War of the Worlds or Independence Day. Well, Hawking and other like-minded atheists needn’t worry, Penn State just released its analysis of 100,000 galaxies probed by NASA’s Wise space observatory. They were looking for evidence of advanced alien civilizations and found none.

[by Earl Blacklock] In an earlier article, I discussed the irrationality of the argument of “9/11 Truthers” (who could also be called reality deniers), and equated them with scientists who insist that “science only” is the only rational approach for understanding life and the universe. Christians, of course, believe that there is a God, and that He personally intervened to create matter and life out of nothingness. There is currently circulating on the Internet a light-hearted response to this argument. It purports, with tongue firmly in cheek, that in fact the Flying Spaghetti Monster was responsible for creation, and this pasta-based pseudo-deity is personally intervening in the universe “with his noodly appendage” to distort scientific results. They reason that if science must recognize the possibility that God is Creator of all, then why not give the Flying Spaghetti Monster equal time?

According to a 2006 national poll, 42% of Americans have faith – genuine, and heartfelt faith – in the theory that the truth about the 9/11 terrorist attacks has not been told. A large number of these believe the attacks were somehow orchestrated by George Bush, or at least by shadowy elements in the U.S. government. The “9/11 truth” movement has all of the elements of a cult-like belief system. It employs the reverse scientific method whereby one starts with the theory, and then cherry-picks the evidence to fit that theory. Members of the cult drink from the same well, and limit their exposure to mainstream thought. I won’t go into a lengthy description of all of the shortcomings of the argument. Others, particularly Popular Mechanics in its Debunking the 9/11 Myths: A Special Report, have already done so ably and well.

In his book, Marx and Satan, Richard Wurmbrand (1909-2001) looked at the writings of Karl Marx (1818-1883), the founder of communism. Unknown to many, Karl Marx started out as a Christian. Wurmbrand notes those Christian inclinations in some of Marx’s earliest writings such as The Union of the Faithful with Christ where the father of Communism wrote: “Through love of Christ we turn our hearts at the same time toward our brethren who are inwardly bound to us and for whom he gave himself in sacrifice.” Those words are in stark contrast to what Marx would later write as he developed his communistic manifesto, he told the world: “The idea of God is the keynote of a perverted civilization. It must be destroyed.” Though we are uncertain when it happened and why it happened, at some point Karl Marx abandoned his Christian faith.

In my earlier post, I discussed a passage in Revelation 2:12-13, that speaks of a specific place where Satan lived at that time in history — Pergamum (also written Pergamon). And to the angel of the church of Pergamum write: I know where you dwell, where Satan’s throne is and you hold fast My name and did not deny My faith even in the days of Antipas, My witness, My faithful one, who was killed among you, where satan dwells (Revelation 2:12-13 NASV) The city was not only the dwelling place of Satan, but Satan’s throne was located there as well. At the time the Apostle John wrote Revelation, the city was home to a massive altar dedicated to Zeus. Some have suggested the Pergamum altar was in fact the throne of Satan referred to in Revelation. This altar simply manifested a spiritual reality — Pergamum was Satan’s capital. It is not a coincidence that in the natural realm Pergamum was also the capital of Asia. Satan’s presence in this key city gave him an …

[by Dean Smith] In a December 2013 interview with The Guardian, a mortician named only as Lucas, living in San Pedro, Honduras said: “Satan himself lives here in San Pedro. People here kill people like they are nothing more than chickens.” With a population of only 900,000, the city averages 20 murders a day. This works out to a murder rate of 173 per 100,000 more than double the country’s national average which is 85.5 per 100,000. New York City in comparison has 3.5 murders/100,000. According to the article, San Pedro has the highest murder rate of any region in the world outside a war zone.

One of the beliefs of evolution is that dinosaurs evolved into birds. There is a reason evolutionists went down this road and its based on a little known fact about dinosaurs — and oddly it’s one that supports the Biblical record on what ended the dinosaur era. The paleontological record shows that dinosaurs started shrinking in size. This was the conclusion of a study by a group of scientists from Oxford University.

Español: Cómo interactúa el reino espiritual con nuestro mundo físico I was mowing the lawn in our backyard, when a memory popped into my mind of a stupid thing I had done years earlier. I had previously asked God to forgive me, but here it was alive and well condemning me. Where do these thoughts come from? For a clearer insight, we need to study an incident that occurred along the banks of the Tigris River in the ancient realm of Persia around 600 BC. How the spiritual world interacts with the physical world The book of Daniel provides a captivating insight on the interaction between the spiritual and physical realm. In chapter 10, an Angel of God was dispatched to Daniel in response to a prayer he had made in verses 1 – 3. When the angel arrived, Daniel along with some other Israelis was relaxing along the banks of the Tigris river. The angelic visit sparked a vision through which Daniel physically saw God’s messenger. During such visions, I believe God pulls back the …

Español: Lo que el diablo ve In the book of Zechariah, the prophet relays a series of visions that give brief glimpses into the spiritual realm. However, there is one that does more than that. It not only tears away the veil covering the spiritual realm, it also shows how angels and demons view people in the natural world. They see us differently. In chapter 3:1, the prophet Zechariah notices Joshua — who was the high priest in Jerusalem — standing before the Angel of the Lord. Zechariah also observed Satan standing at Joshua’s right hand uttering a barrage of accusations against the High Priest. Joshua was probably performing some type of sacrifice or work associated with his priestly duties. Nobody, in the earthly realm would have seen the Angel of God or Satan standing at the High Priest’s right hand. It was just another day at the temple, but all hell was breaking loose in the spiritual realm. Joshua’s filthy garments In verse three, we are given an odd description of Joshua’s clothes, which were described as filthy …

One of the earliest mentions of gears was made by Aristotle around 330 BC. He was referring to gears in a windlass used to lift heavy weights. He stated by reversing the rotation of the gears, the direction of the load could be changed. It was a wonderful invention for the time.  Archimedes (287-212 BC) an engineer and inventor incorporated gears into many of the inventions he designed. But it appears gears were in operation centuries before this. They were being used by Issus Coleoptratus (Issus C.) to jump. Issus C. is a simple plant hopping bug common in England and Europe. It is part of a group of insects referred to as Planthoppers. Jumping for Issus C. is a complicated process. Any difference in thrust or timing between its two back legs would cause it to spin out of control. To solve the problem, Issus C, uses gears.