I have been looking at how demonic territorial spirits try to control countries and even regions within a country such as a province/state or even a city.

In Jesus’ day, Pontius Pilate was the fifth prefect of Palestine, a region that today makes up much of modern Israel. In turn, Palestine was divided into three districts ruled by a Tetrarch — Samaria, Galilee and Ituraea.

In my previous article, I looked at a deliverance that took place in a synagogue in Capernaum a  major administrative center in the District of Galilee controlled by the Tetrarch Herod Antipas, the son of Herod the Great.

After casting an evil spirit out of a man in a Capernaum synagogue, Mark says that the strong man or evil spirit controlling that area was pulled down (Mark 3:22-27).

As Christ’s disciple, Matthew would go on to write one of the gospels.  In Matthew 13:57-58,  he records what happened when Jesus went to Nazareth. Matthew says that Jesus could not do many miracles there because of their unbelief. 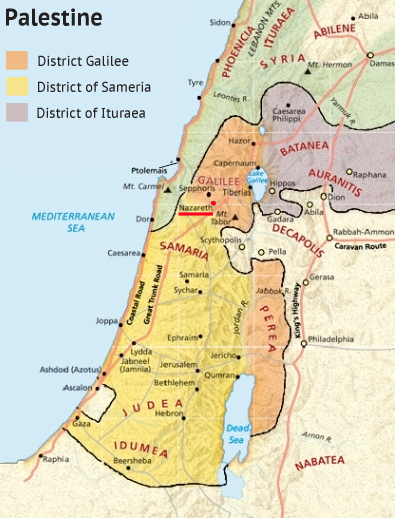 The Districts of Palestine

What a contrast, in one area revival was taking place and another area just a few miles away was completely barren.

The map on the right shows the three districts or states of Palestine.

A few years back, I read a curious story written in a missionary publication called World Map.

In his article, Ralph Mahoney tells of an interesting experience told to him by a missionary based in Uruguay distributing tracts in a little town that sat on the border of Uruguay and Brazil.

The main street was the actual border between these two countries. Due to the village’s isolation, there were no restrictions in crossing the main street, or moving from one country to the next.

One Saturday morning, the missionary was distributing tracts on the Uruguayan side of town. The people either refused the tract or if they did take it quickly glanced at it, then crumpled it up and discarded it.

After spending a couple of fruitless hours he decided to pop over to the Brazilian side. He began handing out tracks and was amazed by the dramatic change, suddenly people were not only taking his tracts but many were intently reading them.

Thinking he was imagining things, he proceeded back to the Uruguayan side of the street. Again he found the people resistant to the tracts.

Puzzled by what was going on, he put this phenomena to a test.

A woman approached him on the Uruguayan side, so he offered her a tract which she immediately refused. When he noticed her cross the street into Brazil, the missionary put himself on an intercept course with the woman on the Brazilian side.

When she passed in front of him again, the missionary offered her a tract a second time. The woman not only took the tract, but she thanked him profusely for it.

Fascinated by what had occurred, the missionary repeated the experiment, each time with basically the same results.

He later remembered a particular involvement he had in a Bible school in Argentina. After weeks of intercession, a powerful prophetic word was delivered, stating that the Lion of Judah had prevailed and that Argentina’s strong man had been broken.

It started a revival in Argentina, that briefly spilled north into Brazil, but stopped abruptly at the border of Uruguay.

For some reason, this move of God hit an invisible barrier and could go no further.

In this little border town, as the people moved between Uruguay and Brazil, they were moving from darkness into light and their response to the gospel showed how significant that was. — EZ