According to Wikipedia, French physicist Edmond Becquerel invented the world’s first solar cell in 1839. He was 19-years-old and used his father’s laboratory to construct it.

According to Dr. Marian Plotkin, an entomologist at Israel’s Tel Aviv University, the answer is an emphatic ‘NO’.

That honor must go to the Oriental Hornet. It is a large insect — 25mm to 35mm long (1 to 1.38 inches) — common to the Middle East, Northern Africa and India.

In his study of this unique insect, Plotkin discovered this species of hornet actually produces electricity from the sun.

Yes it is a living, breathing, solar panel. 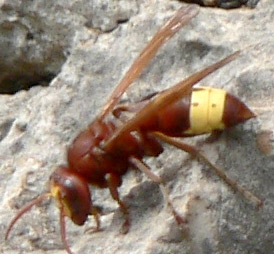 The brown area of the Oriental Hornet collects and traps the sun’s light and the yellow area turns it into electricity. Credit: Kreta/Wikipedia/Creative Commons

To prove his point, Plotkin wired six hornets together and was able to produce enough electricity to fire up a digital watch.

At this point, they are still not sure how the energy is utilized, but some suspect the hornet uses the energy to dig — as the Oriental Hornet creates large nests beneath the earth’ surface.

While most hornets and wasps are twice as active in the morning than in any other part of the day, the Oriental Hornet does most of its work in mid afternoon. This suggests the electricity produced by the intenser midday sun provides the energy needed for the heavy task of constructing underground hives.

The hornet not only creates electricity but actually stores it — it is both a solar cell and a battery.

So how does it do this?

On the backs of the hornet there is  a brown grooved area that collects the sunlight. When sun hits this area, it breaks apart into several beams that are redirected into a layered area containing several rods made of chitlin.

These beams of light then bounce between these rods. Having captured this light it now needs to convert it to electricity.

It does this using the yellow areas on its body made from a pigment called xanthopterin. It transforms the light into electricity.

While most insects have an organ similar to a liver that metabolizes food changing it into energy, the Oriental Hornet’s liver is the yellow area. This suggests that electricity created and stored here is used in part to energize the hornet.

So how did this hornet with an elaborate and complicated system to capture light, convert it into energy, store it and then use it to ever evolve?

Well, it didn’t. In the same way, a solar panel speaks of a designer and a creator so does the Oriental Hornet’s electrical generating system.

God told Israel as they entered the Promised Land, He would use the hornet (Hebrew zorah) to drive out inhabitants of the land before them.

27 I will send My terror ahead of you, and throw into confusion all the people among whom you come, and I will make all your enemies turn their backs to you. 28 I will send hornets ahead of you so that they will drive out the Hivites, the Canaanites, and the Hittites before you. (Exodus 23:27-28 NASV)

Some wonder if the description of hornets was metaphorical, but others are not so sure. If for a season God stirred up hornets making them extremely aggressive, some of the more nomadic groups would have contemplated finding a new place to live.

Then when the Israelis began to move in, this would have been the proverbial last straw. At the very least, it would have reduced the Canaanites willingness to defend a territory they were thinking of leaving anyways.

Since the large, electricity-producing Oriental Hornet is common to Israel, it was undoubtedly one of the species God recruited to convince Israel’s enemies they didn’t really want to stay.