The bell tower of the Sand-Covered church sticking out of the ground near Skagen, Denmark. Credit: Myrna Petersen

On a recent trip to my ancestor’s homeland, a visitation to an old church buried in the sand gave some insight as to the way we build our faith, will have a lasting impression in how future generations view the church.

The Sand-Covered Church (Danish: Den Tilsandede Kirke, also translated as The Buried Church) is the name of a late 14th-century Danish church dedicated to Saint Lawrence of Rome. Built between 1355 and 1387, the red brick church was 45 meters long and the tower was 22 meters tall.

Between 1600 and 1800, desertification or sanding-over of land occurred in the North Jutland coastal areas near the now artistic tourist town of Skagen, Denmark. Desertification destroyed the fields and buried a village near Skagen. By the close of the 18th century the drafting sands had reached the Saint Lawrence of Rome Church. 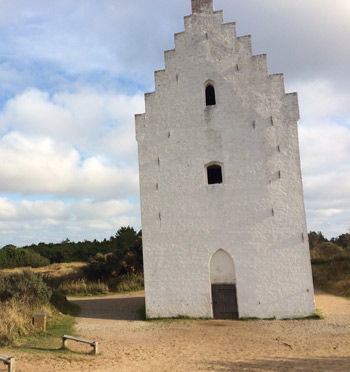 Close up of the bell tower. Credit: Myrna Petersen

Each time before a service was held, the parishioners had to dig out the entrance. The struggle to keep the church free of sand lasted until 1795, when it was abandoned and front doors closed. Nowadays only the church tower with it’s crow-stepped gable is visible, rising above the sandy dunes.

While decommissioned for Christian services by the King of Denmark, it was decided to keep the building as a landmark. It was whitewashed and established as a navigation marker for fishermen, mariners and the navy.

In the late 19th century the National Museum of Denmark, who now own the site, carried out a minor excavation near the tower. The site of the nave has never been excavated. It is believed that the floor, the altar, and the baptismal font are still there under the sand. All that is visible of the former church and the now-buried village is the whitewashed church tower.

This is a true illustration as to how the biggest church in a region can become buried from the public eye by a sea of sifting sand.

“And everyone who hears these words of mine and does not do them will be like a foolish man who built his house on the sand. And the rain fell, and the floods came, and the winds blew and beat against that house, and it fell, and great was the fall of it.”

If the foundation of a church is covered over, it is no good for service to man. The Apostle Paul understood this truth when he wrote, “For no one can lay a foundation other than that which is laid, which is Jesus Christ.” (I Corinthians 3:11)

Members of a congregation can struggle each week to keep the debris out of their church, but if the sand keeps shifting, sooner or later the front doors will not open. It’s not a useful place to those desiring a haven to worship.

However, there are some good things to note:

Built upon the rock, the Christ Jesus, although surrounded by sifting sand, it’s still a beacon. With only its steeple rising from the earth, it’s still a navigational landmark to those at sea. Fishermen (the evangelist) out casting their nets might become lost at sea, but even the smallest ‘church’ landmark, can bring one to the safety of shore.

Merchant Mariners (businessmen) who view the church steeple (still held up by Jesus the foundation stone) can succeed when they observe Christ’s words in their business dealings. As too, those serving in the Navy (intercessors and prayer warriors) receive strength as they guard day-and-night against intruders from the sea.

The Sand-Covered church, hidden from the eyes of the public, still stands – and those who stumble upon the building by land, can experience hope for their generation. This is a picture of how the foundation of God’s word goes deep, even if it is invisible to the naked eye. The walls of the St Lawrence Church of Skagen go far into the earth, and although covered in sand, still remain as intact as it’s foundation.

Considered one of Denmark’s best-known churches, its image has been captured in ceramics, by renowned artists and photographers, and included in the writings of famous authors. The Buried Church appears to have weathered the storm and stood the test of time.

However, its purpose has changed from a place of worship for local parishioners, to an identifiable landmark for those at sea, and one that attracts visitors from all nations.

Now well into the twenty-first century, is the Christian church willing to change ministry focus and adapt to the surrounding sifting sands? Or do we continue to gather just to maintain Christian programs, as has been our custom for past centuries?

Are we alert when the time comes to recognize the front doors can no longer be opened to foot traffic, and take on a new vision that has a far-reaching scope. Are we able to change our colors from red to white, so others from afar may recognize the church as landmark to help navigate our world?

Will we be men and women of faith who like King David, did not die until he “…had served God’s purpose in his own generation…” (Acts 13:36)

Captivating Creative Craftsmen & Study Guide, is filled with inspirational stories behind Biblical artisans and is the latest book from our Open the Word contributor, Myrna Petersen. With references to the Bible, it begins with story telling and gives prophetic understanding of how in the last days, the beauty and glory of the LORD will permeate the world, demonstrated through science and the arts.

As we draw closer to the Creator of the universe, we’ll be inspired to create new works. Creativity, part of our inheritance, from the cave dwelling era to modern society is revealed through various artistic means. It is not just the job of a few artistic types but the expectant hope of every man, woman, and child in the universe.

As Vincent Van Gogh said, “If you hear a voice within you say, ‘You cannot paint,’ then by all means paint, and that voice will be silent.”

For a sneak preview and/or place an order of paperback copies @ $10.00 CDN plus taxes & delivery, from our distributor.

Myrna Petersen is a writer and musician based in Regina, Canada and owner of Ideation Entertainment. She loves to uncover obscure historical gems and present these stories in the language of the common man. Myrna is the author of five non-fiction books, a stage musical and several film scripts. Check here for some of her other writings.

1 | An eye for an eye does not contradict loving your neighbour as yourself?