All of Israel will be saved. Photo: Haifa, Israel at sunset — Dan Zelazo/Flickr/Creative Commons

According to an article in Israel Today, just before Christmas the second most visited Hebrew internet site in Israel, Walla! News, started running a series of interviews with Messianic Jews. They had planned upwards of 24 interviews including one with a well-known Israeli actress.

Even as the series started there were those such as Eitan Bar, who was also being interviewed, asking for prayer as they expected a strong reaction from Ultra-Orthodox Jews.

Perhaps not surprisingly just after Christmas, Walla! News stopped the series after threats of a boycott and law suit by Ultra-Orthodox Jews. It is illegal in Israel to advertise any missionary activity and some believed these interviews broke this law. The website removed any reference to Messianic Jews as well as interviews previously posted.

In many ways it represents the strained relationship that remains to this day between the Church and Israel.

What is the Church’s position on Israel?

When Israel refused to accept Jesus as their Messiah, it rejected God’s calling. God in turn rejected Israel and raised up the church to fulfill his purposes on earth. Some of this opinion believe Israel is beyond salvation.

Others hold that Israel is still God’s chosen people and that Israel as promised in the Old Testament will be restored to its land and ultimately fulfill God’s purposes on earth.

So how do we fit the church and Israel together?

To answer this question, we need to first understand who is an Israelite. Traditionally a Jew is determined by lineage. If you are born a Jew, you are part of God’s chosen nation. It is all in the genes.

However, this view was radically challenged by the Apostle Paul who as a master Jewish theologian had today’s equivalent of a Doctorate in theology.

After his miraculous conversion on the Road to Damascus, God opened Paul’s mind to what the Old Testament scripture was saying.

Not all Jews were Israelites

The key to this discussion is what Paul says in Romans:

6 But it is not as though the word of God has failed. For they are not all Israel who are descended from Israel; (Romans 9:6 NASV)

In other words Paul says a person is not a Jew because of their lineage or birth. Not every Israeli was a true Israeli.

To prove this, he cites the case of Esau and Jacob. They were fraternal twin brothers, born at the same time, from the same mother and father — Isaac and Rebekkah. Both were equally legitimate descendants of Abraham.

In other words, genetics did not make a person a Jew. In God’s eyes, a true Israelite is one who believes in the coming promise of the Messiah — that being Jesus Christ.

What to do with the gentiles?

The second stage of this development occurred in the Book of Acts when the Holy Spirit fell on the Cornelius and his family who were all gentiles (Acts 10).

All the circumcised believers who came with Peter were amazed, because the gift of the Holy Spirit had been poured out on the Gentiles also. (Acts 10:45 NASV)

What were they to do with these gentile believers?

Could they be accepted as full members of the early church which up to this point was composed solely of born-again Jews?

A conflict developed as some argued these gentiles had to first become Jews (be circumcised) before becoming Christians (Acts 15:5). Others disagreed.

In Acts 15, the early church leaders held a conference in Jerusalem to resolve this controversial issue.

At this conference, James stood up and quoted from the book of Amos where it talked about God restoring the captivity of Israel and rebuilding the Tabernacle of David. But this passage also mentioned a gentile remnant coming into Israel.

Could this passage explain what was happening in the early church with the outpouring of the Holy Spirit on Cornelius and his group?

Though this promise specifically applied to Israel, the early church clearly believed it was being fulfilled in their day. It was obvious they thought themselves as Israel.

At the Jerusalem conference, the Apostle Peter pointed out that the gentiles had not only been saved before circumcision but the Holy Spirit had been poured upon them. Obviously, God accepted them just the way they were — uncircumcised (Acts 15:9, 10).

It was decided then that the gentiles did not need to be circumcised before becoming Christians (Acts 15:19-20).

Paul explains the theology behind this decision:

He says a circumcision is still required, but it is no longer outward in the flesh, but rather inwardly in the heart, through the born-again experience. Several times throughout the Old Testament, God called for the Jews to circumcise their hearts (Jeremiah 4:4; Deuteronomy 30:6).

This was part of the new covenant that God promised Israel, where the law would be written on their hearts:

33 “But this is the covenant which I will make with the house of Israel after those days,” declares the Lord, “I will put My law within them and on their heart I will write it; and I will be their God, and they shall be My people.” (Jeremiah 31:31, 33 NASV)

Simply, physical circumcision was no longer necessary. Circumcision of the heart would rule the day.

In the book of Romans, the Apostle Paul sums up the relationship between Israel and the church using the analogy of two olive trees — a tame tree representing true Israel and a wild one representing the gentiles.

Paul said the unbelieving Jews (branches) were broken off the tame Olive tree. This included any Jews who did not accept Jesus as the Messiah during Paul’s day and as well any in the past, like Esau, who never believed in the promise of the coming Messiah.

Simply put, they were never part of the true Israel.

The wild olive tree represented those among the gentiles who believed in Jesus. They were grafted into the tame olive tree.

17 But if some of the branches were broken off, and you, being a wild olive, were grafted in among them and became partaker with them of the rich root of the olive tree …

20 Quite right, they were broken off for their unbelief, but you stand by your faith. … 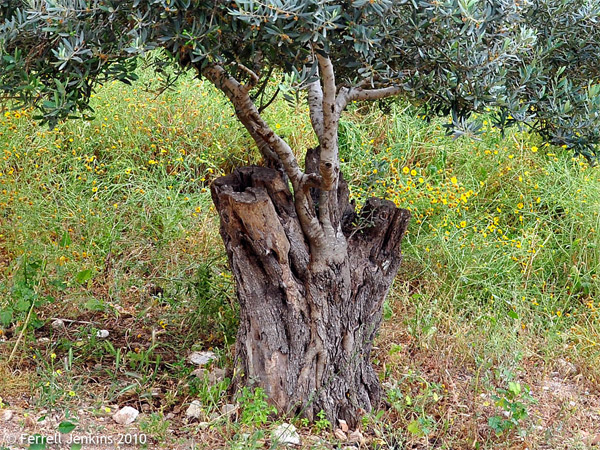 Photo of wild olive branches grafted into the trunk of a tame olive tree in the village of Nazareth. Photo: ferrelljenkins-wordpress-com

In Acts 7:38, in Stephen’s speech before he was martyred he referred to Israel during Moses day as the “church in the wilderness. Then in Galatians 6:16, the Apostle Paul refers to the believers in Galatia as the Israel of God.

There is a believing thread, a remnant, starting with Abraham that winds its way through the Old Testament including the 7,000 who did not bow their knee to Bail in Elijah’s day (Romans 11:1-8).

Israel and the promised land

Now there are some passages in the Old Testament (Jeremiah 30:3; Isaiah 43:5-7; Ezekiel 36:24) that talk of Israel being restored to the physical promised land. I believe this was prophetically fulfilled in 1948.

In his Olive tree analogy, Paul says God hardened the hearts of the Jews paving the way for the gentiles entrance into the Kingdom of God (Romans 11:11-12).

But Paul, citing an Old Testament passage, says eventually all Israel will be saved:

26 and so all Israel will be saved; just as it is written, “The Deliverer will come from Zion, He will remove ungodliness from Jacob.” (Romans 11:26 NASV)

At some future time, the Jews will embrace Jesus as their Messiah. It appears this will happen in the restored nation of Israel when the unbelieving Jews in mass will be grafted into the true Israel of God which includes the church.