[by Dean Smith] In April, Kansas was the first state in America to ban dismemberment abortion.

This procedure, allowed during the second trimester (fourth to sixth month), involves inserting a long bladed scissor type device through the cervix and ripping off the babies arms and legs allowing it to bleed out.

Death often does not come immediately, but it is inevitable. It is the most common method of abortion in the second trimester.

In an interview with Life News, Mary Spaulding of National Right to Life said:

“Before the first trimester ends, the unborn child has a beating hear, brain waves and every organ system in place. Dismemberment abortion occurs after the baby has reached these milestones.”

With more medical procedures being done on babies in the womb, there is overwhelming evidence that babies experience pain as young as 20 weeks and some believe earlier. Many hospitals are now giving babies anesthetic to help them through operations while in the womb.

Meanwhile, most states allow abortionists to do whatever they want to kill the baby. Basically an abattoir slaughters animals more humanely.

When Kansas Governor Sam Brownback signed Bill SB95 into law on April 7, 2015, he tweeted he was proud to be “protecting life at its most vulnerable stage.”

Of course, predictably others were outraged that Kansas was removing this brutal form of killing from an abortionists’ repertoire.

About the video — The Silent Scream

In the disturbing video above — produced by Jack Duane Dabner and narrated by former abortionists Dr. Bernard Nathanson — you will witness an abortion first hand. Produced in 1984, it shows a baby’s abortion in just the first trimester using ultrasound.

In the procedure, the abortionists was using a high speed suction tube to rip the baby apart. He had done an estimated 10,000 abortions, but after seeing this video, it would be the last one he ever did.

Like most in the pro-choice movement, he had convinced himself it wasn’t a baby in the womb but a mindless conglomerate of cells called a fetus. In the video, the abortionists tries to remove the baby’s humanity by simply referring it to as “number one.”

What was so disturbing is that it immediately becomes obvious the baby senses the tube entering the womb and you can see her desperately trying to pull away from the killing device.

But where can you run and hide in a womb?

If a baby supposedly can’t feel pain, how did the she even know the suction tube was there?

Obviously, she could feel it.

Because she was scared and in pain.

Dr. Nathanson points out the “silent scream” as the baby opens her mouth as she is ripped apart. Predictably abortionists making a living from the procedure have tried to discredit the film, but since most of us don’t have any money in this game, we can be more objective.

Watch it and decide for yourself. But be warned, it is disturbing. 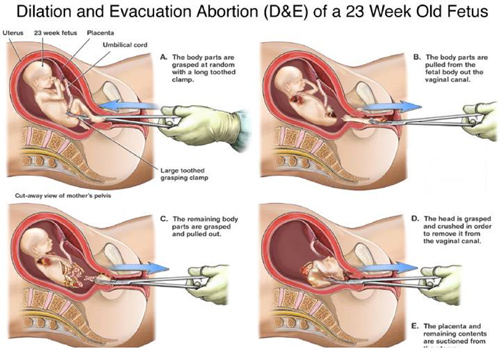