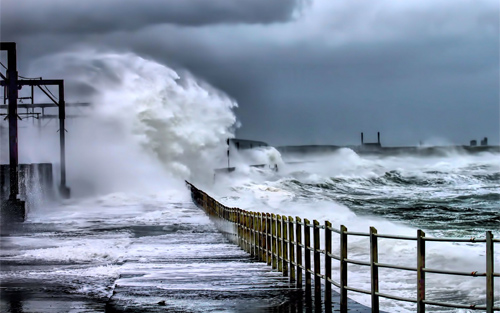 In times of trouble. Photo oliverc999/Foter/CC BY

[by Earl Blacklock] U.S. Coast Guard cutter George M. Bibb was designed as a ship of war – and of hope. In World War II, its crew rescued hundreds from the waters of the North Atlantic, but its greatest challenge was the post-war rescue of those in a downed trans-Atlantic airplane.

The Bermuda Sky Queen, piloted by Captain Charles Martin, was a Boeing 314 flying boat with 62 passengers and seven crew. On October 14, 1947, the plane was flying from Ireland to Newfoundland when it encountered unexpectedly strong headwinds from a heavy gale. Martin realized that the plane didn’t have enough fuel to make it to land in either direction, and he decided to land the plane beside the Bibb, on weather station duty nearby.

The flying boat was designed to land on the sea, but it was never intended to withstand the fury of a North Atlantic gale. When he was notified the 42 ton plane was landing by his ship, Bibb captain Paul Cronk could only pray “Oh, God, grant that I do not have to stand here helpless. Help me save them.”

With nerve and skill, Captain Martin managed to land his plane near the ship, but an attempt to bring the craft close to the ship almost proved disastrous as the flying boat damaged its nose and wings in a collision with the cutter.

Each attempt to transfer the passengers proved challenging and difficult. Waves were as high as a three storey building, and the first effort to launch a boat from the ship had to be abandoned. The ship had a larger powered boat, but the plane could be damaged further if the boat lay alongside it. Those rescued would have to first get into a raft beside the plane, then transfer to the boat and be ferried to the ship.

An inflatable raft was launched from the plane, but it burst. The second was also lost; the third leaked. It took almost eight hours before the first three passengers were removed, and darkness was approaching.

As the gale reached 45 knots, with night upon them, the crew made trip after trip to the plane, and rescued many. At times, they dangled from lines or plunged into the sea to rescue a survivor. Then, the surfboat’s propeller got tangled in the raft’s lines, tossing those in the boat into the water. They were all rescued, but the boat was lost.

Further attempts to reach the plane proved fruitless, and for seven long hours, the plane’s remaining passengers and crew had to wait for sunrise, their plane steadily taking on water. Fortunately, by dawn the wind had died down enough to complete the rescue. Both crews had performed their duties with skill and, as a result, everyone was saved.

The church is called to the same task – to work well together so that none are lost. Proverbs 24:10-11a says “If you falter in times of trouble, how small is your strength!. Rescue those being led away to death.”