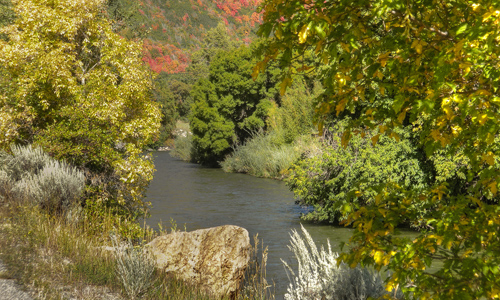 If only one had heard it, you could blame a hyperactive imagination, but when three say they heard the same thing, you have to wonder what was going on.

There is no explanation why the car Lynn Jennifer Groesbeck, 25, was driving ended up upside down in Utah’s Spanish Fork River along with her 18-month-old daughter Lily.

And it wasn’t until the next day, an estimated 14 hours after the crash, that a man fishing along the banks saw the bottom of the car protruding from the shallow waters of the river.

He called emergency and after police and firemen arrived this is when it gets interesting.

A second responder at the scene, officer Jared Warner, heard the same thing.

“[It] wasn’t just in our heads. To me it was as plain as day. I remember hearing a voice that didn’t sound like a child, just saying ‘help me.'”

“Someone said ‘help me’ inside that car.”

When they searched the car they found Lynn dead, her daughter unconscious and barely alive. She was held in place above the water by her car seat. The toddler was immediately transferred to the hospital where she is recovering.

Though not common there are instances in the Bible where people heard God or an angel speaking to them in an audible voice.

The Apostle Peter heard  a voice telling him to kill and eat unclean animals he saw in a vision. This paved the way for the gentiles being accepted in the early church (Acts 11:6-8).

As a boy, the prophet Samuel heard a voice call out to him while sleeping near the Ark of the Covenant (1 Samuel 3: 1-6) .