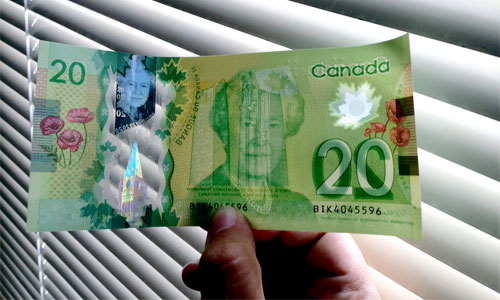 The Bank of Canada, which prints and manages Canada’s currency, has stated it is exploring producing its own version of digital money.

Bank of Canada senior deputy governor Carolyn Wilkins suggested this move in a speech at the University of Waterloo in Ontario in early November.

The announcement, reported in The Globe and Mail, was prompted by the rise of  digital currencies such as Bitcoin. There is concern that virtual currencies could eventually challenge the Bank’s monetary authority.

At this point, digital currencies are not a serious threat. In 2013, around the world there were only 70,000 Bitcoin transactions taking place on a daily basis. This compares to the 21 million credit card and debit card transactions made daily in Canada alone.

However, since Bitcoin was formed in 2008, its popularity is steadily growing. It is no longer relegated to internet transactions, but has reached the point where some stores and restaurants will even accept Bitcoin payments using special readers to complete the transaction. Other forms of virtual currencies are also being developed.

As these virtual transactions continue to grow, there is concern they could eventually affect the Bank of Canada’s ability to regulate its own market.

“We are nowhere near this point today. But if we were, it would be even more important to determine whether issuing e-money is a role that should be done by the central bank.”

The Bank is also concerned that the failure of some virtual currencies could have a profound impact on consumers and even governments. Wilkins cited the hundreds of million of dollars in losses due to the failure of Japan’s Mt. Gox Bitcoin market as an example.

The video below gives an overview of how Bitcoin works:

For decades, many who have studied end-time prophecies have wondered if Biblical references suggest a cashless society.

The Book of Revelation mentions that people would not be able to buy or sell without the Mark of the Beast:

17 and he provides that no one will be able to buy or to sell, except the one who has the mark, either the name of the beast or the number of his name. (Revelation 13:17 NASV)

In a previous post, I discussed a man who inserted a chip into his hand that could be used to make Bitcoin purchases. At present, other devices such as cell phones or key chains store information that can be read by Bitcoin readers at retail locations accepting this digital currency. The Apostle John saw the Mark of the Beast on people’s hand or foreheads (Revelation 13:16).