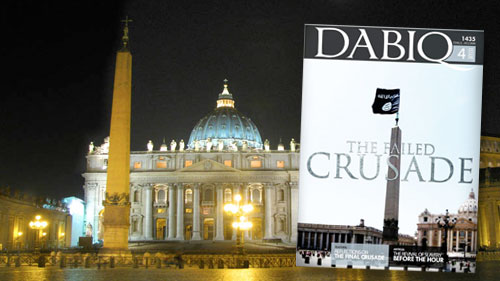 [by Dean Smith] Arutz Sheva — an Israeli news site — reports the Islamic State (which go by a variety of acronyms IS, ISIS, ISIL) has just declared Christians as its number one enemy.

This news was broadcast loudly on the most recent cover of the organization’s propaganda magazine called Dabiq.

In its fourth edition, the cover of the English version featured a photo-shopped picture of the Black ISIS flag on top of the Egyptian obelisk in the Vatican’s St Peter’s square. The magazine — titled “The Failed Crusade” — compared the West’s efforts to stop IS to the Roman Catholic crusades.

“We will conquer your Rome, break your crosses, and enslave your women, by the permission of Allah, the Exalted…”

The conquering of Rome has eschatological overtones for Muslims. Similar to Christians, Muslims also have a messiah called the Mahdi. Some extremists believe that Mohammad prophesied Mahdi’s coming will be take place when Muslims have occupied three cities:

With the rise of the Islamic State — and its goal to set up an Islamic Caliphate — Christians are under siege in the Middle East. It is estimated there are about 12 million Christians in the region.

According to Father Gabriel Nadaf, 100,000 Christians are murdered each year in the Middle East because of their faith. Nadaf actively campaigns for Christian rights in Arab countries.  In a presentation to the United Nations Human Rights Council in September, Nadaf said:

“Those who escape persecution at the hands of Muslim extremists have fled… Those who remain, exist as second if not third class citizens to their Muslim rulers.”

Iraq which in the past had a large Christian population has seen these numbers decimated as IS has taken control of large swaths of the country.

Iran is also notorious for its persecution of Christians. Recently, a Christian caught eating during Ramadan had his lips burnt off by extremists and another Christian was given 80 lashes for drinking communion wine. Yet despite this, the Christian population in that country is exploding.

The Mahdi is considered the redeemer of the Muslims. He is expected to show up 7, 9 or 19 years prior to the Muslim day of judgement. It is said, he will rid the world of evil.

However, the Qu’ran — the Muslim scripture — does not mention the Mahdi. The teaching on the Mahdi comes largely from the hadith a second collection of sayings reportedly made by Mohammad.

Over the years, a number of Muslim teachers or Imans have claimed to be the Mahdi. It is reported that Abu Bakr al-Baghdadi, founder of the Islamic State in Iraq is making the claim. Others who have made a similar claim include Wallace Fard Muhammad who founded the American-based Nation of Islam in Detroit, Michigan in 1930. He led the Nation of Islam until his disappearance in 1934.