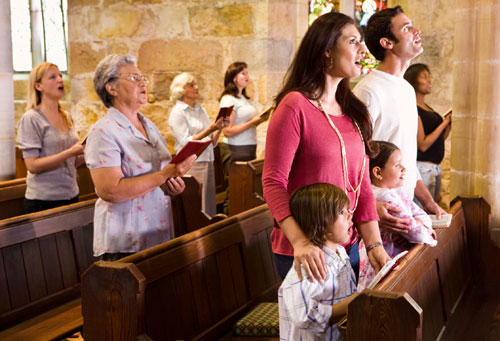 What affects a child’s future church attendance as an adult?

In England, the feminist message is fully embraced in the Church of England where separate offices have been set up for feminist theologians. The church’s liturgy has been emasculated changing references to God from Father to mother. The Bible is being rewritten to engender sexual neutrality.

But if a study done in Switzerland is any indication, this feminist influence in Liberal churches may be one of the reasons why church attendance is in a downward spiral.

Women have important roles to play in the church ranging from the prophetic (not just the gift of prophecy) to teaching. There is plenty of room for women in ministry, but women’s roles should not be achieved by demeaning fatherhood.

God created men to have a prominent role in the development of their children’s faith. Prior to establishing the “official” priesthood in Israel under Aaron, fathers filled the priestly role (Gen 8:20; 22:30).

In 1994, Swiss researchers Werner Haug and Phillipe Warner of Switzerland’s Statistics office conducted a study to determine what factors paved the way for the successful transference of the parent’s faith to the next generation — specifically measured by church attendance. They used stats from the Swiss census which tracked various aspects of Swiss life including religious.

What Haug and Warner discovered was absolutely startling. One of the most important factors affecting a child’s future church attendance as an adult was their father’s attendance.

The study entitled, The demographic characteristics of the linguistic and religious groups in Switzerland, looked at the full spectrum of Switzerland’s religious breakdown. Switzerland’s population is just over 7 million: 46% consider themselves catholic, 40% protestant, 9% no religion and 5% other.

Since it encompassed orthodox, liberals and evangelicals, it did not measure the influence of Biblical faith, prayer and the Holy Spirit in a child’s future participation in church. But nevertheless it revealed the important role fathers have in faith transference.

What the study found

Not surprisingly, in families where neither parent attended church, only 4% of their children became regular attendees, 15% were classified as irregular attendees and over 80% did not attend at all.

There was a dramatic increase in regular church attendance, when both dad and mom attended church regularly. In these families, 33% of their children attend regularly, 41% irregularly and 26% did not attend at all.

When dad was an irregular attendee and the mother regular, 3% of the children were regular church attendees, 59% irregular and 38% did not attend at all.

Incredibly, a child’s future church attendance was best in families where fathers attended church more than the mother. It even bettered families where both parents regularly attended.

For some reason, the mother’s indifference strengthened the father’s influence in the spiritual development of the family.

It is difficult to understand why. But let me suggest this possibility. If children are looking to their fathers for spiritual guidance, in families where the father attended church — despite their mother’s indifference — it proved the sincerity of the father’s faith. This may also suggest that in situations where both mother and father are regular church attendees, the father may be attending because of the mother’s influence, a fact being picked up by the children.

Commenting on this study, Anglican Vicar Robbie Low says, “when the child begins to move into that differentiation from home and engagement with the world out there, he (and she) looks increasingly to the father for that role model.”

However, mother’s fighting alone in their faith should not be dismayed. As I mentioned earlier, this study did not calculate the influence of a true faith in God, belief in prayer and working of the Holy Spirit.

The Apostle Paul acknowledged the significant role Timothy’s mother Eunice and grandmother Lois had developing his faith (2 Tim 1:5). Though we are not sure of the father’s status, clearly an active faith and prayer of these two women played a key role in Timothy’s life and eventual call to the ministry.

But even in single parent families, fathers are still important and God has promised to be the Father to her fatherless children (Ps 68:5). In these situations I believe the Holy Spirit will take a special interest in the lives of the children.

Kathy Woodard in her article, Father’s Knows Best, summed it up this way:

“The leadership of the man within a family is like the law of gravity: you can try to wish it away; you can argue it’s unfair. But walk off the edge of a building and you plummet. Likewise with fatherhood — try to ignore it and your civilization collapses.”