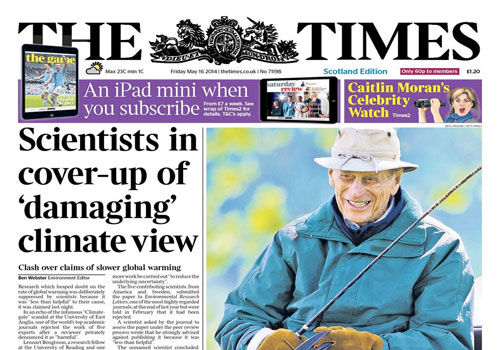 Shocking front page cover story in The Times accuses those in the man-made global warming camp of a cover-up of dissenting research.

This was the front page of a major English newspaper, The Times, Scottish edition, on May 16, 2014.

It features a stunning attack on some of those promoting man-made global-warming, who the article states are trying to cover-up research that suggests things aren’t really as bad as they say it is.

According to The Times’ article, global-warming scientists allegedly suppressed research that did not agree with their theory.

Five climate experts based in America and Sweden wrote a research article stating the world’s climate is much less sensitive to greenhouse gases than those in the global warming camp would have us believe. In their article, the group pointed out errors in global-warming research that undermined their sensational claims of what will happen if we don’t cut C02 emissions.

The group presented their article to the Environmental Research Journal, an academic journal, in December 2013 for publication. In February 2014, the five climate scientists were told their article had been rejected.

The article was sent out to unnamed scientists for a peer review. One of the peer reviewers opposed publishing the article stating:

“Actually it is harmful as it opens the door for oversimplified claims of ‘errors’ and worse from the climate skeptic’s media side.”

In other words, this unnamed scientist was more concerned about how this article could potentially damage the global-warming cause than he was in discovering the truth. The journal insists the article was refused for scientific reasons.

“Lennart Bengtsson, a research fellow at the University of Reading and one of the authors of the study, said he suspected that intolerance of dissenting views on climate science was preventing his paper from being published.”

In the article, Bengtsson said:

“The problem we now have in the climate community is that some scientists are mixing up their scientific role with that of a climate activist.”

If this is happening, it is not science, it is activism and it may not be limited to just the field of global-warming — read: Extraordinary dinosaur find challenges evolution.