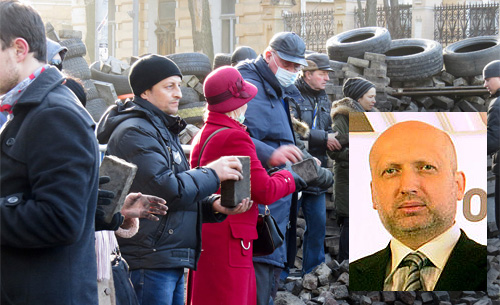 The Ukraine is on the brink of civil war and separation as the country’s east and west face off.

The man put in charge of holding the country together is Baptist pastor Oleksandr Turchynov, 49. He was recently elected interim president by the Ukraine government.

His appointment came after the sudden departure of former President Viktor Yanukovych who was under increasing pressure from Ukrainian citizens opposed to the country’s growing ties with Russia.

There is a distinct divide in the Ukraine with the eastern side occupied by a majority in the area wanting closer ties to Russia. Many are Russian immigrants who moved in after the old Soviet Union occupied the Ukraine under Joseph Stalin during World War II.

Complicating the issue is part of this area was given to the Ukraine by the Soviet Union in 1954. This includes the Crimea  — a peninsula on the Black Sea — that is home to Russia’s Black Sea fleet. .

The area is largely Russian speaking and though the one-million ethnic Russians living here represent a majority in the East, they are a minority in the Ukraine. Many in the region are now calling for it to separate from the Ukraine.

The Western side represents traditional Ukrainians with a pro-west view wanting closer ties with the European Union.

Protestors took to the streets of Kiev protesting the country’s growing ties with Russia under Yanukovych. The protest centred on a huge camp built in Kiev’s central square called Maidan which had been occupied for several months.

When the police fired on the protestors, it turned violent and calls came for Yanukovych, who was the focal point of the protest, to step down.

Yanukovych eventually fled the capital. The Ukrainian government has since stripped him of his presidential powers and appointed Turchynov as interim president until elections are held in May.

Who is Dr. Oleksandr Turchynov?

Oleksandr Turchynov, who has a doctorate in Economic Sciences, serves as pastor of a small Baptist church in Kiev called Word of Life. In a country of 45 million, the Baptist church is only 135,000 strong.

The choice of Turchynov, a prominent opposition member of the legislature, is proving somewhat controversial. Some believe it’s possible with his protestant roots he can find the middle ground between the Ukrainian Catholic Church (strong in the West) and the Ukrainian Orthodox Church in the East.

He is not a charismatic figure and has worked background political roles in the country. However, he comes with strong organizational skills which could prove valuable over the next few months. Many consider him a good consensus candidate for this time.

There are times in Biblical history, when God raised up believers to play key political roles in secular nations. God raised up Joseph in Egypt to preserve Israel and Queen Esther in Persia to ward off an attempt to exterminate the Jews in captivity. It was Esther’s uncle who persuaded her to act telling her she may have been raised up “for such a time as this.”

Turchynov has a political background having served as deputy prime minister under former Prime Minister Yulia Tymoshenko who was thrown in jail in 2011 charged with abuse of power.

In 2005, Pastor Turchynov wrote a novel called Illusion of Fear. The book is filled with Biblical imagery.

The book, described as a psychological thriller, involves a business man who is arrested and forced to pull out of a successful business. He escapes and plots his revenge. During this time he begins to lose his mind and has visions that he is also King Solomon.

The book exposes corruption and this tied with its strong Biblical message — including many Biblical quotes — portrays a noble fight against evil.

In 2008, a popular film of the same name based on the book was put forward by the Ukraine as their nomination for an Academy award as best foreign language film. The film was not short listed by the Academy.

In a statement released on Sunday, February 23, 2014, the European Baptist Federation responded to Turchynov’s announcement stating in part:

Joy and sadness overfills our hearts as we celebrate the news of birth of a New Ukraine and grieve for the young men, students and husbands who died for this to happen.

For the past three months Ukraine was absorbed by the cloud of anti-government protests and demonstrations that resulted in the worst violence since it gained Independence in 1991. The events of the last several days have been crucial as we the witnessed the creation of a new Ukraine’s history.

The Parliament has taken a responsibility to end the crisis in the country and adopted a number of vital laws. Our brother in Christ and minister of one of the Kiev Baptist Churches Dr. Oleksandr Turchynov, a leading opposition lawmaker, was elected Speaker of parliament. Among other rapid development Ukraine’s ex-minister Yulia Tymoshenko also was released from prison after which she was taken in a wheelchair to Kiev to make a speech at the Independence Square in Kiev. The Parliament also voted to remove President Viktor Yanukovych and set new presidential elections for May 25.

The Parliament has taken a responsibility to end the crisis in the country and adopted a number of vital laws. Our brother in Christ and minister of one of the Kiev Baptist Churches Dr. Oleksandr Turchynov, a leading opposition lawmaker, was elected Speaker of parliament.

This situation caused the churches and even denominations get united in prayers and fasting for the peace and God’s intervention. People started crying out to God and even the TV media spoke about the role of the church and quoted Scriptures.

Unfortunately, many people have much anger and hatred for opponents. People are disappointed in all politicians and do not want to forgive anyone. Many are determined just to revenge, burn and bring about injuries.

But we need to face this challenge with Christ. What Ukraine needs is not just a change of people in authority but a change of the system and the relationship of the authorities to ordinary citizens. Ukraine needs love, mercy and forgiveness.