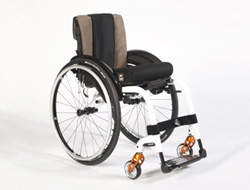 When June Clarke phoned the British government to cancel her disability allowance, she never expected problems.

In 2000, June was severely injured after a bad fall at work resulting in damage to her lower spine, pelvis and hip. Due to the intense pain, she was unable to walk and was confined to a wheel chair. Because the injury was permanent, her doctor signed forms providing disability payments from the government for the rest of her life.

But June and her husband Stuart — who serves as pastor of the Hooe Baptist church in Plymouth, England — believed for a miracle. Stuart said he prayed daily for his wife’s healing.

Six years later the miracle showed up. In January 2006 —  while attending a Christian conference —  June was miraculously healed. It took her a few hours for her to appreciate the extent of the healing and once she did, June folded up her wheel chair and stopped taking pain medication.

A short time later, June realized she was now no longer eligible for disability payments.  First she went to her doctor who though amazed by the dramatic turn in her condition cautioned her about giving up disability. He suggested June wait six months before canceling to ensure the change was permanent.

However after four months, June concluded the healing was real and called up the Industrial Injury Department to stop the payments.

But it wasn’t so simple. Because her disability was designated permanent, the official handling her claim was unable to cancel her monthly disability pay of 600 pounds.  “We haven’t got a button to push that says miracle,” the official said.

So the payments kept coming. Still feeling uncomfortable about the money, June and Stuart contacted the department a number of times via phone and mail informing them of the change in her condition.

Finally, officials agreed to review the case and sent June to a government doctor for a second opinion. Looking at her history and current condition, the doctor was “baffled” but admitted she was cured.

Her disability payment was cancelled and June was able to find a job that allowed her to pay back the 3,500 pounds she had received in disability after her healing.

In an interview with BBC, Stuart said they would have loved to have kept the money, “but it wasn’t ours to spend.”

“It can’t be often that a government department gets a complaint about unwanted cash,” he added.

In an online article on The Daily Mail’s website, people were allowed to comment on the article. There was a wide range of response:

Some told of their own miracles:

Judith from Paris, France wrote about her own miracle: “I was cured of epilepsy in the same way; through prayer. It really works! Although the government may not have a button marked ‘miracle’ on their system the fact the lady is cured can’t be questioned.”

Mukesh from London, UK added: “Prayer worked for me too — 4 years ago, I was told I had diabetes and was prescribed drugs — however, through prayer — 6 months later and diabetes reversed and I currently take no drugs — saving NHS a lot of money — but I supposed my reward is better health.”

Barbara from Staffordshire UK added: “I have also experienced miraculous healing. It’s a wonderful experience I will never forget.”

Others commended her for her honesty;

J. Dawes from San Diego, California said, “If millions more spoke up and were honest, the government would have much more money in their coffers. God bless this lady for her honesty.”

More than one laughed at the government’s incompetence:

Harry from North Links, UK said: “Defies belief doesn’t it, they couldn’t stop the money because there was no button on the computer, so the head of the department just lets it carry on…’

Steve from London, UK wrote: “Of course not, what did she expect? It takes more than a miracle to get any sense out of the DSS.”

There was a cynic.

Rob from The Hague in the Netherlands commented: “Why even claim benefits in the first place? She believes in the power of prayer to heal her, but not enough for God to look after her throughout her disability?!”

And a doubting Thomas

And of course, no comment section would be complete without a doubting Thomas who refused to believe despite the testimony of the doctors: :

Cliff from Doncaster, UK wrote: “Honesty? How was she cured by ‘miracle’? A myth if ever there was one. The computer only deals with reality.”

In fact, it was the exact opposite Cliff,  the computer was unable to deal with the reality of a miracle.