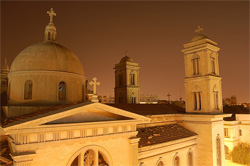 Just prior to their deliverance from Egypt, God told the Israelites to protect their homes from an avenging angel — that would strike down the first-born of Egypt — by marking the lintels and doorposts of their homes with the red blood from a sacrificial lamb (Exodus 12: 7, 8). This became the basis of the Jewish Passover.

Now centuries later, the story is repeating itself in the same country, but with a bizarre twist.

According to the Christian Science Monitor, mulsim extremists in parts of Egypt are marking Christian homes and businesses with  “red” graffiti so they can be targeted in future attacks. The extremists confirmed the colour choice was symbolic stating they would protect Morsi’s “legitimacy” with blood.

Since Egyptians pushed out Mohamed Morsi’s brutal regime backed by the radical muslim Brotherhood, his supporters have gone on a rampage focusing much of their hatred on Christians. Some describe the situation in Egypt as  genocide. Egypt with a population of 90 million has approximately 9 million Christians and relations between Muslims and Christians have been in a downhill slide since Morsi’s election in 2012.

Morsi supporters even blame Christians for their leader’s overthrow, instead of the tens of thousands of enraged Egyptians who took to the streets demanding change.

After a recent attack by the Egyptian military, Christians reported a local mosque in Al Nazia broadcast “Your brothers in Rabaa El Adawiya are being killed by Jews and Christians.” Thirty minutes after the 9 am broadcast, the muslims in the community attacked local Christians and churches. Trucks brought in to carry away the loot suggests this was not a spontaneous act. Christians said they were stunned to see people they considered neighbours and friends suddenly turn against them.

At another camp, Morsi supporters broadcast news it was the Christians who led the anti-Morsi protests leading to his downfall.

On August 18, 2013, brave Muslim extremists marched Catholic nuns through the streets of Cairo as trophies of war after attacking and looting a Franciscan school.

Dozens of churches and numerous monasteries, Christian homes and businesses throughout Egypt have been attacked and destroyed, many burned to the ground. 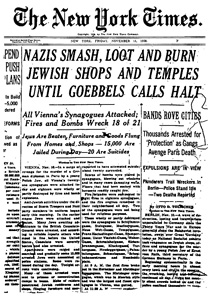 Front page New York Times, November 11, 1938, reporting on the Night of Broken Glass. The article states the attacks occurred “under the direction of Stormtroopers and Nazi party members.”: Wikipedia

This is not the first time an incident has occurred eerily patterning itself off a Biblical account.

In the Book of Esther, we read the story of a senior Persian bureaucrat named Haman, who had orchestrated a single day where Persians around the country would rise up, kill their Jewish neighbours and seize their property and goods.

“Letters were sent by courier to all the King’s provinces to destroy, to kill and to annihalate all the Jews, both young and old, women and children in one day, the thirteenth day of the twelveth month, which is the month of Adar and to seizer their possessions.” (Esther 3:13 NASV).

The attack was thwarted as God orchestrated the rise of a young Jewish woman to Queen of Persia.

A few centuries later, this tactic was replicated in Nazi Germany in a day called the Kristalhacht — The Night of the Broken Glass. It gained this name due to city streets being covered with broken glass. In an orchestrated attack over night on November 8 & 9, 1938, the SA Paramilitary and civilians pillaged and destroyed Jewish homes, businesses, schools and synagogues throughout all of Nazi Germany and parts of Austria.

Approximately 1,000 synagogues were destroyed and 30,000 Jews sent to concentration camps after the night of voilence. Kristalhact marked the start of the Nazi persecution of the Jews.

36 | Who are the two end-times witnesses? Some good news and bad