On June 30, 2015, those familiar with astronomy saw the rare conjunction of the planets Venus and Jupiter — basically these two planets cross paths and for a few days align together giving the appearance of a new brilliant star.

The Venus-Jupiter convergence is the most spectacular of the planetary conjunctions. The one at the end of June was 0.33 degrees apart.

Some have referred to it as the “Star of Bethlehem” because astronomers have calculated this same conjunction took place in 2 AD and may have been the star that marked the birth of Jesus recorded in Matthew 2:2, 9.

“Where is He who has been born King of the Jews? For we saw His star in the east and have come to worship Him.

“After hearing the king, they went their way; and the star, which they had seen in the east, went on before them until it came and stood over the place where the Child was.” (Matthew 2:2, 9 NASV)

Perhaps as mysterious as the star itself is the Old Testament prophecy that set the stage for the star’s appearance. It was given by none other than Balaam — a dodgy prophet paid by the Moabite king to curse Israel during battle. 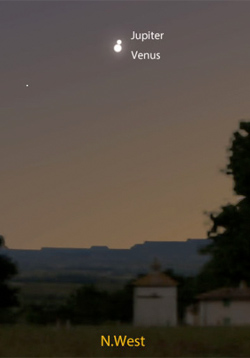 The coming together of Venus and Jupiter on June 30, 2015 Source: Stellarium.com

Though Balaam eventually succumbed to the offer, after being confronted by an Angel of God, Balaam prophesied a blessing instead of a curse. He also prophesied that a star would mark the coming of a new king in Israel:

“I see him, but not now;
I behold him, but not near;
A star shall come forth from Jacob,
A scepter shall rise from Israel,
And shall crush through the forehead of Moab,
And tear down all the sons of Sheth. (Numbers 24:17 NASV)

Then if that isn’t bad enough. When we move to the New Testament, the Apostle Matthew records that wise men saw the star in their home country and knew it was a sign indicating a new king was born in Israel. The problem here is that the correct term describing these men is magi (Greek magoi) and as the name suggests this is where we get the word magic from.

The magi were a class of counselors who worked closely with the kings of Persia. They were astronomers who dabbled in astrology (a practice condemned by God) and used this to advise  the king. Their association with the Persian court explains why Herod willingly received a visit from these Persian dignitaries.

We know from the Book of Esther that while Israel was in its Persian captivity, a number of Persians believed in Jehovah which may suggest some had a familiarity with the Old Testament prophecy (Esther 8:17).

And because of their unique position in the Persian Royal court, it also explains why Herod was troubled by their visit. Though Rome dominated during Jesus day, it never did conquer the Persian empire despite many skirmishes. With this talk of a new king, Herod may have been concerned the magi visit was paving the way for a possible Persian invasion.

However, was the Venus-Jupiter conjunction the star these magi saw? The Biblical record says they saw it in their home country and then again standing over the place where Jesus was born suggesting it was straight above.

Though this is a possibility. Others have suggested a more startling appearance such as a super nova was the celestial object that marked the Judean sky.

A super nova occurs when a star at the end of its life span explodes. In the explosion ending its life, the star can for a time outshine a full galaxy. The explosion often noticeable for weeks eventually disappears.

However, those who hold the Venus-Jupiter conjunction as the Star of Bethlehem suggest the one that showed up June 30th may have a prophetic end-times significance similar to the conjunction that appeared two millennia ago announcing Jesus’ birth.

We do know when God created the heavens and earth, He would use stars as signs:

14 Then God said, “Let there be lights in the expanse of the heavens to separate the day from the night, and let them be for signs and for seasons and for days and years; (Genesis 1:14 NASV)

This differs from astrology which believes celestial events have magical properties in themselves that control the fates of men.

36 | Who are the two end-times prophets?