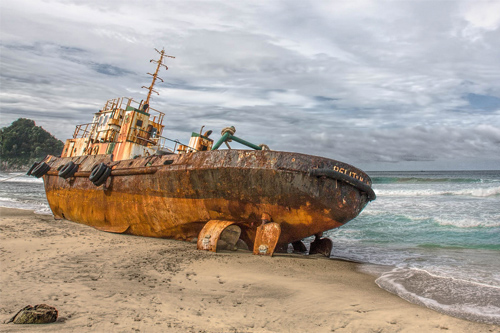 [by Sandy McIntosh] Are you failing? I hope so.

A new book “Roadmap” presents a road trip as a life. A real trip has risk, adventure, detours, and new friends and ideas. Traveling on the shortest, fastest route is a business trip, how truck drivers pay their bills. A successful life is the same.

We can make all the approved life choices; school, marriage, career, car in the driveway. But a sterile, straight-line, quick march to the grave is a profoundly failed life. In Roadmap “That Leave it to Beaver suburban lifestyle went belly up with the rotary phone” (p12).

A prominent New Testament author was a successful lawyer who fell off his horse and was blinded, and converted. His failed life continued until he was shipwrecked while traveling to his trial. He was eventually convicted and executed as a criminal.

Failure to stay on a straight line is success, and assembly-line conformity is real failure. The god of this world is a disappointing religion.

The province of Alberta, where I live, recently voted out a 44 year government. The shock has gone around the world, and I wonder if this fabulously wealthy place is near economic failure. We are circling the drain and we need to find a new way.

My home city of Edmonton is now host to a paroled terrorist Omar Khadr. He followed a radical Muslim line early in life and the consequences were severe; loss of an eye and other severe injuries, and several years in Guantanamo Bay. Now he is trying to salvage what is left of his life.

Recently I connected with a school classmate who kept apologizing for her bad life choices. She feels like a failure, near retirement age. Now she has poor health, divorce, and other regrets.

She asked me about my life, and I had to wonder if I was a failure. It’s easy to remember choices I could have done differently.

I believe the modern world is changing too quickly, and our best decisions can be failures with straight line thinking. It’s becoming too hard to keep up. Did we choose the right car, house, city, career, spouse, religion?

The answer is simple; success and failure need a new measuring stick. What choice informed those surface decisions? And not failing is the only failure.

That failed lawyer wrote “Do not be conformed to this world, but be transformed by the renewing of your minds” (Romans 12:2) and “whatever things were gain to me, those things I have counted as loss for the sake of Christ.” (Philippians 3:7). In a prison, at night, he sang through the walls.

In your life, I hope you can see failure, places where you stepped off the straight line. If you are reading this, it’s not too late.

18 | What is the most important thing you can do in spiritual warfare?