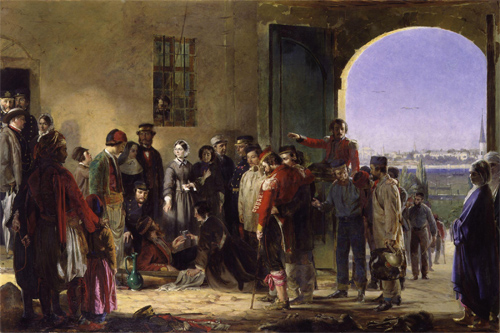 [by Earl Blacklock] Something that has always astounded me is how completely the `world-changing influence of Christian men and women is ignored even as their legacy is celebrated. Ask the average person to give a summary of the impact of Christians on history, and you are more likely to hear their 10th hand rendition of real and imagined offenses during the Crusades and the Inquisition rather than how our modern society is indebted to the groundbreaking work of these Christians.

One of the most influential of these Christian pioneers was a young woman, born to privilege, who created a profession that touches every life. Nurses around the world universally credit Florence Nightingale as the woman who made their profession one of honour. She  introduced virtually all of the protocols and standards that are now understood by even a first year student nurse.

Known as the “Lady with the Lamp” for her ceaseless work with wounded soldiers in the Crimean War, her dedication was immortalized by William Howard Russell, a war correspondent, who said of her “When all the medical officers have retired for the night and silence and darkness have settled down upon those miles of prostate sick, she may be observed alone, with a little lamp in her hand, making her solitary rounds.”

Henry Wadworth Longfellow immortalized Florence in the poem Santa Filomena in this way:

The wounded from the battle-plain,
In dreary hospitals of pain,
The cheerless corridors,
The cold and stony floors.
Lo! in that house of misery
A lady with a lamp I see
Pass through the glimmering gloom,
And flit from room to room.

Despite the acclaim she received from others, there is little of Florence Nightingale we have learned from her own words. She was not taken to self-promotion. We do know this, however – she was a Christian woman whose commitment to service arose from the moral values she held as a believer. She learned her skills in hospitals throughout Europe, bringing both better care and improved management wherever she worked. She was recognized as Britain’s leading authority on hospitals, and when she was offered the position of Superintendent of nurses at a military hospital in Scutari, Turkey during the Crimean War, she said yes.

Until Florence’s work with thousands of wounded soldiers, their lot was to suffer, as Longfellow put it, “in dreary hospitals of pain”.  Florence took steps to ensure they could get treated nearer the front. She fought to make sure the highest standards of hygiene and health care were followed. And she set the standard of care with her own tireless work.

In addressing an assembly of nurses, she reminded them, “Christ is the author of our profession.” It was evident that she saw her life’s work as a way to follow her Lord. She lived her life, unselfishly, in the service of others.  She understood the meaning of I Peter 4:10 which says ‘Each one should use whatever gift he has received to serve others, faithfully administering God’s grace in its various forms.”