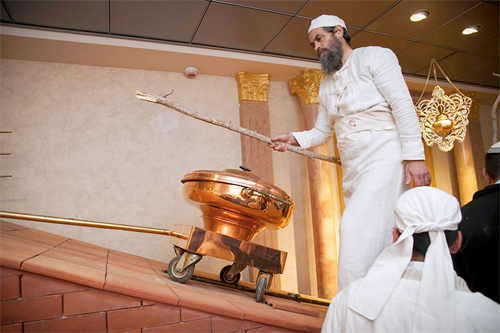 UPDATED MARCH 23, 2015: [by Dean Smith] Israel’s Temple Institute, based in Jerusalem, just announced it had finished constructing the Altar of the Lord (also called the altar of burnt offering) this past December. The altar would be used for animal sacrifices if a new Jewish Temple is built in Jerusalem. The Romans destroyed the last temple in 70 AD.

There were two altars in the original temple — the altar of burnt offering — which was just built and the smaller altar of incense.

The Institute built the new altar according to the strict measurements and conditions laid out in the Old Testament. The media originally reported it stood 5 meters high (16 feet), however according to information just released by the Temple Institute, the altar is actually five amot high (a Biblical measurement) which works out to 7.7 feet and 24.5 feet wide. It comes complete with a ramp that allows for easy access to the top of the altar where the sacrifices took place.

The altar of burnt offerings, that sat in the outer court of the temple, took several years to construct and can become operational almost immediately. Since the law required the altar not be made of “hewn stone” (Deuteronomy 27:5-6), the Temple Institute had it constructed from baked earthen bricks and natural stones that were not artificially shaped.

In the Old Testament, the altar was used twice daily for sacrifices (Exodus 29:39-42). The Temple Institute (TI) has also created garments for the priests (including the High Priest’s crown) and as well, trained members of the priestly tribe to perform animal sacrifices.

Over the last few years, TI has produced nearly all the sacred vessels and furniture necessary for a functioning temple including incense shovels, chalices, a golden menorah and the table of shew bread — click here here to view the completed items.

However, the altar of burnt offering was not necessary for all sacrifices, including those that take place during Passover that starts this Friday, March 20, 2015 at sun down.

In recent years, some Jews have attempted, unsuccessfully, to sacrifice animals on the Temple Mount. Since such an act would enrage the Muslims who control the Dome of the Rock that sits on former site of the Jewish temple, the Israeli government has prevented orthodox Jews from making sacrifices to keep the peace.

The goal of the Temple Institute is to rebuild the Jewish temple, but Dome of the Rock prevents this.

However, some believe the Dome of the Rock was not the site of the old Jewish temple, but rather Rome’s Fort Antonia. They provide Biblical evidence the temple actually sat 600 meters north of the Dome of the Rock, where there is room to build a third temple.

To date there have been two Jewish temples. King Solomon built the first one in 967 BC (1 Kings 6:1, 37) which the Babylonians destroyed in 587 BC. The second temple was built during Ezra and Nehemiah’s day about 520 BC (Ezra 6:15). However, it was heavily damaged by Antiochus in 167 BC and laid in disrepair until King Herod rebuilt it. The Romans obliterated the second temple in 70 AD.

The Temple Institute had architect Shmuel Balzam design the altar which was constructed to be easily taken apart and reassemble. Balzam has also been tasked with drawing up plans for a third temple.

A Jewish temple in the end times?

There are Biblical references that suggest a third Jewish temple is a necessary ingredient of end-time prophecy. A temple is mentioned in the Book of Revelation and if this is referring to a physical building, the Jewish temple will need to be rebuilt.

Then there was given me a measuring rod like a staff; and someone said, “Get up and measure the temple of God and the altar, and those who worship in it. 2 Leave out the court which is outside the temple and do not measure it, for it has been given to the nations; and they will tread under foot the holy city for forty-two months. (Revelation 11:1-2 NASV)

Likewise the Apostle Paul refers to a desolation taking place in the temple:

Let no one in any way deceive you, for it will not come unless the apostasy comes first, and the man of lawlessness is revealed, the son of destruction, 4 who opposes and exalts himself above every so-called god or object of worship, so that he takes his seat in the temple of God, displaying himself as being God. (2 Thessalonians 2:3-4 NASV)

However, some believe these are spiritual descriptions — possibly the church which is described as a temple (Ephesians 2:20-21) — and not a real physical Jewish temple.

The reason for the uncertainty is due to the destruction of the Jewish temple in 70 AD, which Jesus had prophesied (Mark 13:1-2).  The Lord also spoke of the Abomination of Desolation that would take place in the temple.

15 “Therefore when you see the abomination of desolation which was spoken of through Daniel the prophet, standing in the holy place (let the reader understand), 16 then those who are in Judea must flee to the mountains. (Matthew 24:15-16 NASV)

In this prophetic teaching, Jesus was referring to an earlier prophecy in Daniel 11:31 that refers to an individual stopping the Jewish sacrifices and destroying the temple. Since these events took place when Rome destroyed the temple in 70 AD, it’s argued these predictions were fulfilled. Because of this, the temple mentioned in Revelation must therefor be spiritual.

However, those who think Revelation refers to a physical temple agree the temple was destroyed in 70 AD, but since it did not spark the end-time events mentioned in Revelation or those prophesied by Jesus in His end-times description (Mark 13), then Revelation must be speaking of a yet to-be-built third temple.

They also point to Antiochus Epiphanes IV of Egypt who in 176 BC took control of Jerusalem as an example of what they mean. Antiochus removed the Jewish High Priest and set up his own man in Jerusalem. He even set up an idol on the Jewish altar and sacrificed pig’s blood, purposefully desecrating the temple.

Around 167 BC, Antiochus sacked the temple removing all its contents and ending the sacrifices. In some ways, these acts fulfilled Daniel 11:31 (which speaks of the abomination of desolation and ending of sacrifices).

However, the temple was later rebuilt by Herod (74 BC to 4 BC). The restoration of the second temple started in 19 BC and was finally completed in 63 AD.  This was the temple Jesus visited and the one destroyed in 70 AD.

Since both Jesus and Paul speak of the Abomination of Desolation taking place in the future, then what happened under Antiochus was not a fulfillment of Daniel’s prophecy, but rather a foreshadow of what was to come. The same applies to the destruction of the second temple — it was just a foreshadow.

Because neither the first or second temple’s destruction sparked the end-time apocalyptic events in Revelation, it is argued these references to the Abomination of Desolation in the temple (by Jesus, Daniel and the Apostle Paul) along with a description of a temple in Revelation are speaking of a yet un-built third temple.

Final note – Ezekiel’s temple: The prophet Ezekiel had a vision of another temple (Ezekiel 40:2 – 47:2). Since this temple will be built after the destruction of Gog outlined in Ezekiel 38-39, many believe, if it is describing a literal physical temple and not a spiritual one, it will be built during the 1,000 year reign of Christ.