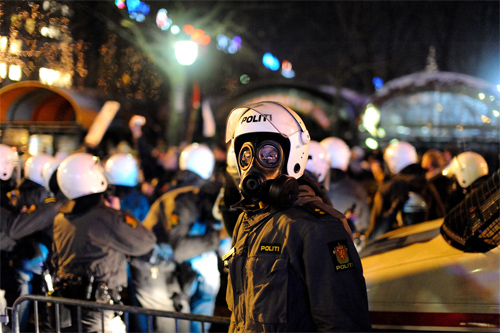 [by Dean Smith] In an earlier post, I discussed Jesus’ parable on prayer. It involved a woman’s run-in with a corrupt judge (Luke 18:2-8).  It was an interesting passage as the Greek words portrayed intercession as little more than a street fight.

As Jesus wraps up this teaching, He clearly wants to separate our Heavenly Father from the character of the Judge and says:

“Now will not God bring about justice for His elect who cry [boao] to Him day and night, and will he delay long over them.” (v 7 NASV)

The Greek word for “cry” used here is “boao.” It is a word full of emotion — anger and frustration. It means to cry out and to raise a complaint.

To understand “boao’s” depth of meaning, we need to see how it is used in other verses.

“Boao” is used in Acts 17:5-6, when the Jews of Thessalonica — angered by Paul and Silas who were preaching the Gospel in that city — took to the streets in protest. The mob charged through the narrow alley-ways “shouting” (boao) that Paul and Silas who had upset the world needed to be removed.

They were demanding change. This is a full-fledged protest, borderline riot — read the verses yourself.

Fists shaking in the air.

They would not take “NO” for an answer. The Bible says their “boao” stirred the city. This is the “boao” — riot prayers — that God responds too.

In the Septuagint — the Greek version of the Hebrew Old Testament — the word “boao” is used in a several passages that express emotion.

Clearly in these accounts, we are not talking of soft prayers uttered briefly around the dinner table.   We are talking about intense, emotion-filled intercession.

In 2 Timothy 1:6, Paul exhorted Timothy to “stir up” or “kindle afresh” the gift God put in him through the laying on of the hands of the presbytery. This is a curious verse, because though the gift was spiritual in nature, Paul said Timothy was responsible for activating it through his own will.

In the garden of Gethsemane, Jesus was involved in intense prayer to the point his sweat looked like drops of blood (Luke 22:44). This is “boao” in its purest form.

Hebrews 5:7 says of Jesus, “Who in the days of his flesh, when he had offered up prayers and supplications with strong crying (boao) and tears unto him that was able to save him from death, and was heard in that he feared;”