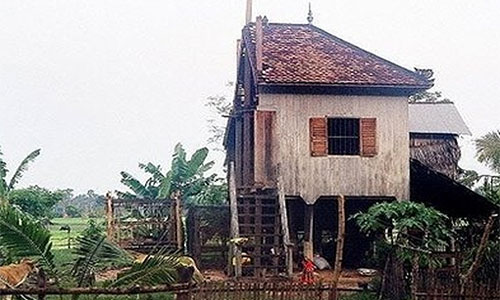 Actual photo from Phnom Penh Post, Cambodia of home cut in half as couple decide to separate. This is how the children feel. Image khucgigia/Foter/CC BY-SA

[by Dean Smith] There used to be a time, a long time ago, when parents in troubled marriages stayed together for the sake of their children. Sometimes those marriages actually turned around. Other times they struggled through. But those days are long gone.

Today divorce is easy. If the billboards in North America are right, you can get a simple divorce for $399 and sometimes they go on sale.

But those prices are deceiving because for children, depending on their age, the cost of divorce can sometimes be very expensive. Some end up paying for their parents’ divorce the rest of their lives.

Resolution is an English legal organization made up of 6,500 lawyers who specialize in family law. They recently commissioned a survey to find out how divorce affected children. They surveyed 500 kids (aged 14 to 22) in England and Wales asking them pointed questions on the impact of their parents’ divorce.

According to Resolution, every year in England an additional 100,000 children are added to the list of those with divorced parents.

In their news release, Resolution said:

New evidence published today indicates that for the tens of thousands of teens each year who experience parental break-up, particularly those in the middle of crucial exam years, the consequences of separation are more damaging and wide-ranging than might be expected.

The survey asked students to compare there life before and after the divorce. It found:

I recently discussed another study that showed there is no such thing as a good divorce. Indiana University’s Dr. Jonathon Beckmeyer found that children were negatively affected by divorce even if the parents were on good terms before and after the divorce.

This study showed that the act of divorce was the problem. In Malachi 2:16, God says “He hates divorce.” Note God does not say He hates the men and women involved in the divorce, it is the divorce itself that angers God. Maybe this is because God knows the impact it can potentially have on children.

Obviously, some divorces are inevitable. Marriages may be violent. One may want it while the other spouse doesn’t. Divorce happens. However, it is important to understand the true costs of this decision.

7 | How Satan attacks us from the spiritual warfare