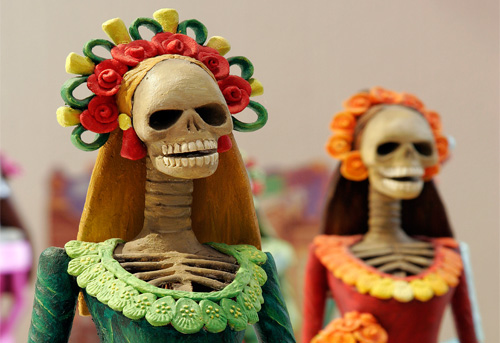 One of the festivals celebrated by many Mexican Catholics is Day of the Dead. Photo Catrina — a popular figure in Day of the Dead celebrations:  Wikipedia/Tomascastelzao

Christian Solidarity Worldwide USA (CSW) is reporting Evangelical Christians are being persecuted because of their refusal to fund a traditional Catholic festival in the village of Union Juarez in the state of Chiapas, Mexico. Chiapas is Mexico’s southern-most state.

CSW is calling on Mexican authorities to help the Evangelical Christians under pressure in the village.

According to CSW, traditional Catholic villagers are demanding each member of the Mount Tabor Evangelical Church in the village give 500 pesos which works out to about $38 US. The members of the Evangelical church refused to pay.

The Mexico Constitution states people can’t be forced to attend or give to ceremonies or festivals of other religions.

However, Catholic traditionalists in the village believe they can demand contributions under Mexico’s Law of Uses and Customs, which according to CSW’s news release  “gives indigenous populations autonomy to exercise traditional forms of justice and to protect their culture.”

Using this, on February 11, 2014 the village cut off water to 25 families who belong to the church. Two days later, their electricity was cut off.  According  to the CSW, they even went a step further and tied ropes around their homes and posted guards, effectively putting the Evangelical families under a form of house arrest.

When a member of the Evangelical church tried to reconnect his water, villagers forcibly confined him for nearly a half-a-day as punishment.

Village leaders told the Evangelicals that their water and electricity would be restored once they made the donation.

Dr. Jorge Lee Galindo is Director of Impulso 18, an organization that works with CSW in Mexico. In a statement, he said:

“Unfortunately this case is not atypical in Chiapas, where village authorities regularly attempt to impose the majority religion on all inhabitants of the village. Crimes like this take place with impunity, contributing to a worsening of the situation as can be seen in this case. State authorities should intervene in the early stages to prevent increasing violations of human rights, and those responsible for criminal acts must be held accountable in a court of law.”

Day of the Dead festival

One of the festivals celebrated by many Mexican Catholics that Evangelicals would not be interested in supporting is Day of the Dead.

Mexican Catholics observed it during three holidays on the Catholic calendar: Hallowmas October 31, All Saints Day November 1 and All Souls Day November 2. Day of the Dead is believed derived from an ancient Aztec ceremony dedicated to the goddess Mictecacihuatl.

During the festival, families gather to honour and pray for the dead. They make altars for the departed and go to the cemetery and decorate their graves. Gifts are also left at the graves, that can include toys for deceased children.

Catholic churches are often heavily decorated for the three-day event. Marigolds (the flower of the dead) are a big part of the decorations which also includes skull masks and skeletons made from cardboard.

It is believed the spirits of children will visit the living on Hallowmas and spirits of adults on All Saints day. The festival features parades and parties. Day of the Dead has spread out from Mexico and is celebrated by Catholics in many countries around the world.

CSW was founded in England in 1981, and the U.S. office in 1997. The purpose of the organization is to work on behalf of persecuted Christians in other countries through, prayer, advocacy and aid.

Their theme verse is Hebrews 13:3: “remember those in prison as if you were their fellow prisoners, and those who are mistreated as if you yourselves were suffering.”