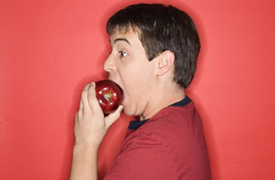 The key to avoiding sin?

Loran Nordgren – a senior lecturer on management at Kellogg School of Management, Northwestern University, Evanston, Ill – with his team of researchers released a study on how to escape greed and lust. The key is to avoid temptation.

In the Book of Proverbs, King Solomon warns about the adulteress:

“Keep your way far from her, and do not go near the door of her house.” Proverbs 5:8 NASV

Many believe avoiding such things as sexual sin involves exerting self-control in the heat of the moment, but Solomon says it actually starts earlier when one consciously decides not to go “near the door” of sin.

There is an invisible aura surrounding sin called temptation and once we penetrate this barrier, it latches on to our sinful nature. Our mind clouds and what seemed so incredibly wrong moments earlier is now all you want.

Many believe they can toy with sin – play along the edges – without actually being drawn into the act itself.

Nordgren says this is where we make our first miscalculation – underestimating the tremendous power and draw of temptation.

In his news release, Nordgren describes it this way:

“People in a ‘cold state’ (not experiencing hunger, anger, sexual arousal, etc) tend to underestimate how a ‘hot’ impulsive state will influence their behaviour.”

Our second problem is we also tend to over-estimate our self-control.

“People are not good at anticipating the power of their urges, and those who are the most confident about their self-control are the most likely to give into temptation,” Nordgren says.

When studying a group who had quit smoking, Nordgren found those with the highest confidence level in their self-control were the first ones drawn back to smoking after simply watching a movie on the subject.

Nordgren adds those who judge the failures of others also fall into this same group because the act of judging implies a belief one is beyond falling for a similar temptation.

Maybe this is what Jesus was referring to when He warned against judging saying, “Why do you look at the speck that is in your brother’s eye, but do not notice the log that is your own eye?” Mathew 7:3 (NASV).

It seems the very belief we are not vulnerable is what makes us vulnerable and transforms a speck into a log. It is also this deluded sense of invincibility that allows us to draw close to the “door of sin” thinking we have the strength to pull away at the last moment.

Nordgren summed it up this way:

“The key is to avoid any situations where vices and other weaknesses thrive and, most importantly, for people to keep a humble view of their willpower.”

The prophet Jeremiah summed it up this way:

“The heart is more deceitful than all else and is desperately sick; who can understand it?” Jeremiah 17:9 (NASV)