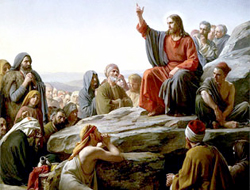 Jesus taught we need to forgive in order to be forgiven. Image: Jesus’ Sermon on the Mount by Carl Bloch (1834-1890) Wikipedia

In many ways, the Bible seems like a book of opposites. In the Old Testament law it was an eye for an eye and a tooth for a tooth. But in the New Testament, Jesus said we must forgive those who do you wrong.

These two views are so extreme, they seem almost irreconciable.

Yet the sad story of the senseless murder of Brian Muha best explains this paradox.

Brian was attending school at Franciscan University in Steubenville, Ohio, where he planned to become a doctor. He had returned home to briefly to visit Rachel, his mother, and was heading back for summer classes.

Just before he left, Brian sent his mother a bouquet of roses. It was the last time she heard from him.

That same afternoon, Rachel received a call from the police stating Brian and a friend had gone missing. They told her an all out search was in progress. A week later, the brutalized bodies of Brian and Aaron Land were found.

Two men were eventually arrested for the murder. Their motive was summed up in one word: they did it for the “thrill.”  They even bragged about the murders to their friends.

The story that eventually came out sickens any parent. The two men kidnapped the boys and beat them with guns. They were then marched up a hill and shot execution style.

When Mrs Muha first heard her son’s body had been found, she recited the Lord’s prayer given in Jesus’ Sermon on the Mount, over and over again.

“Our Father who is in heaven Hallowed be Your name. …And forgive us our debts as we have forgiven our debtors. And do not lead us into temptation, but deliver us from evil. For Yours is the kingdom and the power and glory forever, Amen For if you forgive others for their transgressions, your heavenly Father will also forgive you. But if you do not forgive others, then your Father will not forgive your transgressions.”   (Mat 6: 9, 12-15 NASV).

Mrs. Muha realized she needed to forgive these two men who so brutally murdered her son in order to experience God’s forgiveness.

She forgave and then prayed for their salvation. Mrs Muha’s forgiveness was so sincere, she even petitioned the courts not to execute the two murderers.

Her story is perfect picture of the Old and New Testament working in tandem. The Old Testament reflected the laws given to the nation of Israel. It was the nation’s responsibility to implement justice and protect society.

When Jesus talked about forgiveness, He was speaking of the individual’s response. We are required to forgive, because God has completely forgiven us our our trespasses.

Some suggest, based on Jesus’ teaching, the state should abolish the death penalty. I disagree, because Jesus was not speaking to the state when He taught on forgiveness; He was speaking to you and me.