Christmas truce celebration between German and British soldiers on December 24, 1914. Illustrated by A. C. Michael and published in The Illustrated London News on January 9, 2015/Wikipedia

Silent Night, Holy Night, one of the most popular Christmas hymns, turned 200 this year or 202 if you go by the year the words were written.

The verses to this popular Christmas classic were written in 1816 by Joseph Franz Mohr, a Roman Catholic Priest living in Austria. However, it didn’t become the hymn we know today until 1818 when, Franz Xaver Gruber, a music teacher and good friend of Mohr wrote the music for the song.

It was all sparked by a broken-down organ. 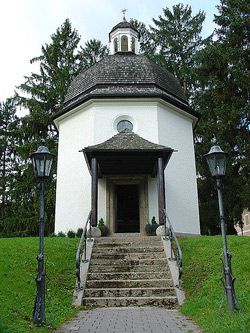 The song was first performed publicly at a Christmas eve service 200 years ago today at a small church in the village of Oberndorf, near Salzburg, Austria. The organ had broken down in St Nicola church (Nicholas in English) and because of this Mohr who was serving as a priest, asked his friend to put music to the words he had written two years earlier that could be accompanied by a guitar so they could sing it that night as part of the Christmas eve service.

Gruber agreed. He spent the day writing the music and that night the two of them sung the song during the Christmas eve service.

But if it wasn’t for that infuriating organ, the song would have been long forgotten. Despite several repairs it continued breaking down and finally in 1825 the church was forced to bring in Carl Mauracher to repair the organ. He not only repaired organs but was renown for building them as well.

After being sung that one night seven years ago, the song had not been sung again and by this time Mohr was now serving in another church.

While repairing the organ, Mauracher came across a copy of the music and words. Struck by the song he received permission to reproduce it and began distributing the song that quickly became one of the most popular Christmas carols across Europe and eventually the world.

And it was powerful enough to briefly stop one of the bloodiest wars in the past century. It is estimated that 19 million people died during World War I.

But there was short reprieve on the Western Front as the German and British troops peered at each other from their trenches on Christmas eve, December 24, 1914.

Then the German soldiers, who were well aware that they could be seen by the British soldiers, held up Christmas trees with lights upon them and it seemed they were extending Christmas greetings to their enemies across no man’s land.

But it wasn’t until the German soldiers started singing Stille Natcht! Heilag Nacht that the miracle happened. Though singing it in German, the British soldiers quickly picked up on Franz’s tune and realized they were singing Silent Night, Holy Night.

The British soldiers began singing the English version of the song in harmony with the Germans.

Then a shocking thing happened, two British soldiers dropped their guns and climbed out of their trenches and walked into no man’s land that separated the two armies. Two German soldiers did the same and  joined the British soldiers shaking hands.

Then soldiers from both armies poured out of the trenches to join them. On the British side, the officers quit trying to stop their soldiers from doing the same and eventually joined them.

Soldiers from the two warring armies built a large campfire and began sharing small gifts of chocolate, food and badges with each other. They sat around the campfire showing photos of their families.

Then on December 26, 1914, the soldiers returned to the their trenches. A German officer fired two shots into the air and the war resumed.