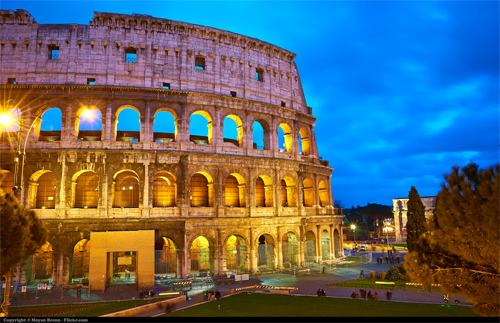 [Earl Blacklock] The Colosseum in Rome is one of the most visited tourist sites in the world. Millions come each year to view with awe its remnants. And little wonder. Designed to seat 50 thousand people, it was an architectural masterpiece. But it had a bloody history.

The arena was the place where the idle gathered to amuse themselves, and Roman society had many idle, to the extent that the state had to placate them with free food and amusement to keep them out of trouble.

By the reign of Emperor Claudius (41-54 A.D.), 159 days of public holidays were in place, of which Claudius devoted 93 days to spectacles in the arenas of the empire, of which the Colosseum was chief. Juvenal, a writer of the day, said of his fellow Romans that they “now long eagerly for just two things: bread and circuses”.

Built in four years from 69 to 81 A.D. by thousands of slaves, the Colosseum’s dedication ceremony consisted of a fight to the death involving thousands of gladiators, who were usually prisoners of war, slaves, or criminals. Since Rome was so successful in waging war, there was an endless supply of them.

When a gladiator fell wounded in battle, he held up one finger to the crowd to ask them for mercy. If the crowd wanted him saved, they waved white cloths – if not, they demanded he be killed. If the Emperor approved, the victorious gladiator would complete the kill.

The spectators had a thirst for gore and spectacle that was so great, it couldn’t be satisfied by warriors fighting a fair battle against each other. Gladiators were forced to fight blindfolded. Women were set against women, and mobs against each other. Defenseless men and women were thrown into the arena to fight wild animals. S

ome of them met their fate as Christian martyrs, helpless before the power of Rome and the savagery of the beasts. This went on for centuries.

One man who fell in the Colosseum arena, however, was not a helpless victim. He was a visitor to Rome who was outraged at what he saw. According to Theodoret, a historian of the day, a Christian named Telemachus “went himself into the stadium and, stepping down into the arena, endeavored to stop the men who were wielding their weapons against each other.” The crowd was so enraged that anyone would try to stop their spectacle that they stoned Telemachus to death.

The Emperor, Honorius, was outraged at the killing of Telemachus, and in 404 A.D. he issued an edict forbidding these bloody contests. The killings ended, and the arenas fell into disuse. Telemachus had succeeded in eliminating the barbarity of the games, at the cost of his own life.

Jesus said “Blessed are the peacemakers: for they shall be called the children of God” (Matthew 5:9). Telemachus showed that one person could bring an end to savagery and injustice, but first they must be willing to take a stand – even if it means their life.