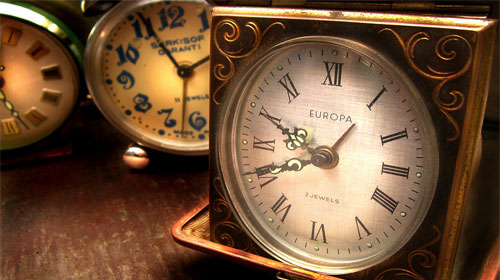 Several years back, my wife and I attended a camp meeting in the U.S. God was moving in the services through the Toronto revival and both of us were impacted by God’s Spirit.   One night, I felt the Lord say He wanted me to stay in the tabernacle and pray for three hours after the service.

The meetings were going late, so it would be about three in the morning before my head hit the pillow.

My preference was to go to bed. But it seemed like God, so I decided to do it.

Now to be honest, I was very legalistic about the time and I looked at my watch every 15 minutes or so to see how much time had passed.   I was a true watchman. God was going to get three hours and not a minute more.

I had been praying for about an hour, when I sensed God saying He wanted me to extend my prayer time to five hours.

When that happened, I began to wonder if I had imagined the whole thing. Was God really speaking to me?

I not only questioned the five hours, but now even the three.

It was about 2 am — while I was in the throes of this struggle — a man walked into the tabernacle and sat down in a pew.   I watched him for a few minutes and then God said “go pray for him.” It came in the form of a simple impression that popped into my spirit.

Being the spiritual giant that I am, I have to admit this whole process of God speaking to me was becoming annoying.    I finally went over and started up a conversation. The man was at the camp with his wife and family and was so totally frustrated by the experience he wanted to pack up his car the next day and head home.

Unable to sleep, he wandered into the tabernacle looking for answers.

I asked him, if I could pray for him and he said yes. As I prayed God revealed — through a word of knowledge — a number of strongholds that bound him. For the next hour and a half, we prayed and God moved.

These words became so specific, I prefaced many of them with phrases such as, “If I am out to lunch with what I am saying, forgive me.”

A number involved sexual struggles. I remember one in particular, where I felt he had been involved in sexual activity as a young boy and memories of this incident still plagued and enticed him.   He told me that nothing like that ever happened to him. So I said fine and didn’t pray about it.

A few minutes later, he whispered, “Well, if you think you should pray about it, then maybe you should.” As I prayed, God broke through. The tears revealed struggles words couldn’t confess.   After he left, I finished off my five-hour prayer time.

As the sun was rising, God spoke to me that the reason my three-hour prayer time had changed to five was because God answered the prayers of the man’s wife who was calling out to God for her husband.   Because of her prayers, there needed to be a two-hour interruption in my prayer schedule.

When people pray schedules will change.

There are even situations when God says “No,” but He is quite willing to change His mind provided people will pray.

In fact, may I go one step further and suggest God wants intercessors to change His mind.

In 2 Kings 20:1ff, we read the story of Hezekiah, the king of Judah, who for the most part was considered a Godly king.   At one point, Hezekiah was afflicted with a large boil. It was a serious infection and the prophet Isaiah shows up with a word from God, “Thus says the Lord, ‘Set your house in order, for you shall die and not live'” (v 1)

Now when Isaiah — one of the most infamous prophets in Israel — shows up with a word from God, everyone knew God’s will for a particular situation.

As soon as Hezekiah heard this word, he turned to God in prayer — asking God to change His mind.

His prayer was interesting:

“Remember now, O Lord, I beseech You, how I have walked before you in truth and with a whole heart and have done what is good in your sight.”

The Bible says, Hezekiah wept bitterly (v 3) and the word implies anger. Hezekiah told God exactly what he thought about his situation. He was angry and upset and thought he was being treated unfairly.   The one things that strikes me about Hezekiah’s prayers is his absolute honesty.

Now God knew exactly how Hezekiah felt, but when the king expressed it in prayer, God changed his mind and sent Isaiah the message before he even left the city.

God told Isaiah to go back to the king with this message, “I have heard your prayer, I have seen your tears, behold I will heal you.” (v 5)

Hezekiah was so shaken by the turn of events, he wasn’t sure he was hearing right. He asked God for a sign he would be healed. God told him, the sun would go back 10 steps contrary to the movement of the sun.   Hezekiah needed to know. Since he did not have a son who would naturally succeed him as king, he needed to make preparations to ensure an orderly transfer in power to the man of his choosing.

Now it’s true God’s extension of Hezekiah’s life allowed him to finally have a son — Manasseh, who would rank as one of Judah’s most evil kings.   However, the choice to change God’s mind, rests with God alone.

God wants to birth in your spirit stubbornness and tenacity in prayer. Though in the end God may ultimately say “No,” He nevertheless wants intercessors who refuse to take “No” for an answer.