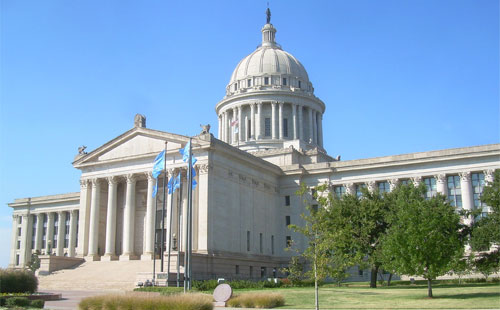 A Oklahoma politician is using a strange argument in her attempt to have Marijuana legalized in that state. According to KFOR.com, Senator Constance Johnson quoted the Bible when she along with attorney David Slane announced a petition drive pushing for pot legalization in the birth place of such stars as Will Rogers, Chuck Norris and Ron Howard.

Citing Genesis 1:29, Johnson said that Marijuana was among a group of herbs God created for people to use.

And God said, ‘See I have given you every herb that yields seed which is on the face of the earth, and every tree whose fruit yields seeds, to you it shall be for food.” (Genesis 1:29 NASV)

“We’re putting forth Genesis 1:29 as the basis of this campaign. God created this wonderful, miraculous plant and we know that it has been vilified for the last 100 years, and it’s time to change that in Oklahoma.”

Johnson has initiated a petition drive to have a statewide referendum on Marijuana usage in Oklahoma. She wants the drug allowed for medical use and possession of small amounts of Marijuana decriminalized. If Johnson can collect 160,000 names, she can force a state-wide vote on the issue.

To entice the government to act, Johnson further proposed a $7 tax per ounce on “recreational marijuana.”

As it stands, two states have already legalized marijuana for recreational usage — Washington and Colorado — and 21 states allow it for medicinal purposes.

After creation, God declared everything He had made as “good” (Genesis 1:31). However, what Johnson fails to do is continue reading the Bible. In the third chapter, we read of Adam and Eve’s fall into sin. At this point, everything, including creation, was affected.

One of the judgements pronounced on Adam and Eve was this:

17 Cursed is the ground because of you;
In toil you will eat of it
All the days of your life.
18 “Both thorns and thistles it shall grow for you;
And you will eat the plants of the field;” (Genesis 3: 17-18 NASV)

Because of Adam and Eve’s sin, the very earth was cursed. The Hebrew word “arar” used in this verse for cursed is derived from the Akkadian word “araru” which means “to snare” or “trap.” With this as its root, the word “arar” means to put a spell on someone or something, “rendering it powerless.” Because of sin’s influence, creation was forced to take a course of action against its will or very nature.

The same word is used in Numbers 22:6, when a Moabite king hired a false prophet named Balaam to curse Israel, literally immobilizing their army, so Moab could defeat Israel’s superior force.

Thorns, thistles and dandelions (my addition) would now plague us because of the curse.  Plants that were originally called good became man’s enemy. Marijuana was on that list.

Marijuana profoundly affected by the curse

All creation was affected by the fall, but some more than others. As government move to legalize pot, researchers are publishing many studies showing the very serious and damaging effects of marijuana on  the brain , particularly among teens. It is far from the safe drug activists are portraying it to be.