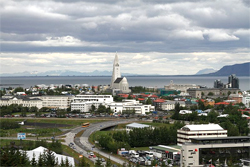 When gay activists in Iceland discovered Franklin Graham — son of Billy Graham — was planning an evangelistic crusade September 28-29, 2013 in Reykjavik their capital city, the activists rose up in opposition. The Franklin crusade was part of the Festival of Hope sponsored by the Billy Graham Association and 41 Icelandic churches.

Though the crusade was free, the Festival of Hope committee allowed people to reserve tickets online for the event being held at Reykjavik’s Laugardalsholl arena. They set a maximum limit of 4 tickets per reservation with special consideration for groups of 20 or more.

The gay activists quickly spread word through Twitter, Facebook and Reddit for people to reserve tickets and then not show up at the crusade. If they were effective, the place would be empty. One person boasted on Facebook, he had booked 500 tickets under this pretense.

Gay organizations such as ‘Samtokin 78’  publicly supported the ticket protest and then during the two day crusade, the organization held a human rights meeting at a building across the street from the crusade.

Rainbows were also painted on the sidewalks in front of the arena. The rainbow has been a sign used around the world to symbolize gays.

In an interview with the Iceland Review, Einar Jóhannes Guðnason of the  Philadelphia Church responded:

“[The colors] didn’t bother me at all because the rainbow is a pact between God and men, according to the Bible.

It is rather strange that city authorities are wasting time and money on provoking Christian people and violating traffic laws by having sidewalks in the wrong colors.

It was the police who removed them at least one of the times, I saw it myself.”

The protest generated extensive media.  The difficult part was the suggestion Franklin hated gays because he didn’t agree with gay marriage. But each time it was mentioned, it was publicity for the crusade.

When Franklin Graham finally arrived, there were nearly 3,000 people in attendance each of the two nights. Considering Reykjavik has a population of 120,000 and the country only 320,000 citizens, the attendance was significant. Putting it in perspective, you would need 3 million people to attend a crusade in the U.S. to match the Icelandic numbers.

Though it started off slow, the momentum quickly built. Hundreds of people came forward to accept Jesus for the first time, and hundreds more rededicated their lives to God.  Here is an excerpt from an article on the Billy Graham website describing the meeting from one man’s perspective:

It normally takes a lot to move Skúli Barker to tears.

But what he witnessed on Sunday night in his country…

He’ll be the first to tell you, that simply doesn’t happen in Iceland.

“My wife was sobbing next to me,” Skúli said. “And I started to cry. It’s just amazing.”

It started off as a few souls responding at the end of Franklin Graham’s Gospel message and before he knew it, throngs were flooding the stage, elbow-to-elbow, hundreds of people packed in, aisles backed up.

Skúli doesn’t want to be overdramatic, mind you, but he’s a native Icelander in his 40s now, and he’s seen the state of Icelandic people when it comes to talking about God or anything spiritual.

“There’s a joke here that we are the ‘Frozen Chosen,’ ” Skúli said. “But it’s really true. In Iceland, people don’t show their feelings. So for Icelanders to come forward to receive Jesus …”

“It’s just been a real fight here for Christians,” he said. “And this gives us hope.”

As a result of these two meetings, Christians in Iceland are wondering if this may be setting the stage for a revival in Iceland.

Is God moving in the Scandinavian countries?

I have written a couple posts on this, one involving a story the Bible was the best selling book in Norway last year, and more recently of a salmon caught in Sweden with a very distinctive cross on its white belly. Many of the men in the fish plant considered the fish a sign from God.