Canadian pop star Justin Bieber has 95-million followers on Instagram and recently he shared a message with them on his personal faith in Christ.

The 23-year-old pop star took a photo of a white erase board on which he wrote a message with a black marker:

The photo caption read simply “Jesus is changing me from the inside out every day! AND I MISSPELLED GUILT and exhausted.”

Despite the typos and as someone pointed out maybe “god” should be capitalized, it was a heartfelt message. I loved the way it was hand written including even the typos because this showed it was real.

Over 2.2 million, mostly young people, liked the post and 52 thousand commented. Not all the comments were positive, but the majority were. 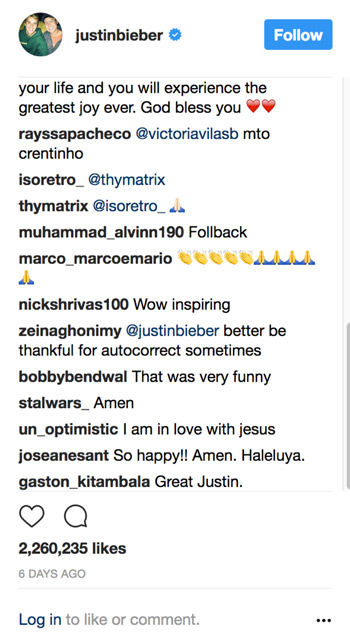 Because few can question the dramatic transformation that is taking place in Justin’s life since his decision to embrace Christ. Just three plus years ago, the pop singer was having multiple run-ins with the police:

Like all Christians, Justin is not perfect, but the ongoing change taking place in his life is a testimony of the work of the Holy Spirit.

I consider Revelation 12:10-11, one of the most powerful passages in the Book of Revelation. Despite, the persecution and Satanic attacks against Christians in the end times that will come primarily through accusations, the Apostle John noted the victory of believers:

“… for the accuser of our brethren has been thrown down, he who accuses them before our God day and night. 11 And they overcame him because of the blood of the Lamb and because of the word of their testimony, and they did not love their life even when faced with death. (Revelation 12:10-11 NASV)

End-times Christians will overcome Satan because of the Blood of Jesus. This is not just lip service, but truly embracing and believing the forgiveness we have through the Blood of Christ. Despite what Satan and others may say we are clean and righteous.

As Justin wrote, Jesus can take away “shame, guit.”

Secondly, they overcame Satan by the ‘word of their testimony’ as their changed lives testified of the work of the Holy Spirit.

Many underestimate their testimony as a powerful weapon in spiritual warfare. Though, there are some who may not like the spiritual message that Justin is sending through social media, few can argue about the transformation that has taken place and is taking place in the pop star’s life.