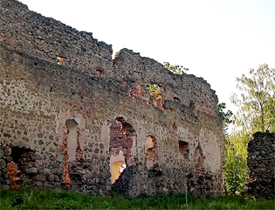 Have the walls protecting your mind been breached? Photo Rauna Castle: Wikipedia

Have you ever felt your mind was under attack? Have you felt flooded with condemning thoughts or memories of past failure?

The Apostle Paul provides insight into a possible source of these thoughts:

“But for one whom you forgive anything, I forgive also; for indeed what I have forgiven, if I have forgiven anything, I did it for your sakes in the presence of Christ so that no advantage would be taken of us by Satan, for we are not ignorant of his devices.” (2 Cor 2:10, 11 NASV)

In this passage, Paul was referring to an incident he addressed in his first letter to the Corinthians (1 Cor 5:1-13). It involved a man living with his father’s wife — probably his step mother.

The church shocked Paul when it turned a blind eye to the sin. He encouraged the Corinthians to deal with the situation.

Between the writing of 1 and 2 Corinthians, the man repented, the church forgave and restored the offender to fellowship.

In 2 Corinthians, Paul followed up on the issue stating as they forgave, he must also forgive to avoid being susceptible to satan’s “devices.”

The Greek word for “devices” is “noema” and refers to perception, intellect, mind or thought. To fully understand its meaning, we need to look at its root word — “noieo.”

According to the Theological Dictionary of the New Testament “noieo” means “to direct one’s mind to a subject … ‘to perceive’, ‘to notice,’ in the sense receiving both sensual and mental perceptions.”

When an individual is unwilling to forgive, the Satanic realm has the “legal right” to influence a person’s thinking. The demonic realm begins to bombard a person’s mind with thoughts, mental impressions, lies and innuendos.

When you don’t forgive offences, Satan has the right to play mind games with you. These attacks are so powerful, over time they can actually distort a person’s reality.

To understand the purpose of this attack we need to take a closer look at the Greek word “pleonekteo,” translated “advantage.” It means simply to defraud thus gaining an advantage.

The concept of fraud involves being convinced of one reality when another is true.

A few years back, I bought an older Toyota Camry with only 175,00 kilometres (105,000 miles), mint condition and not a speck of rust. The price was right and it was too good of a deal to pass up.

I had the car a couple of weeks and one Sunday at church told a friend — who worked at a local Toyota dealership — about my great deal. In particular, I mentioned the unusual seat belts which automatically slid over you when you sat in the front seats.

He looked puzzled and said that feature was only found in vehicles sold in the US.

Almost on cue, the Camry started having problems.

Since, the seller led me to believe the odometer registered kilometres, I approached the person demanding my money back. He refused stating he didn’t know it was an American vehicle. However, the fact he refused to return my repeated calls, told a different story.

It was a classic case of fraud; I believed one thing, when the truth was something else.

It took months to completely forgive the guy. It was the classic 70 times 7 forgiveness Jesus spoke of in Mt 18:22. Every time, I drove the car it reminded me of the offense. Even writing this, I wonder if I need to forgive the guy again.

When we refuse to forgive, the demonic realm has the right to play games with your mind. It will bombard you with lying thoughts.

These can include impressions God hates you or is disappointed in you. Thoughts that no one loves you or appreciates you. Someone doesn’t say “Hi” to you at church, and suddenly a thought pops in your mind that they don’t like you. These thoughts are lies, but slowly we begin to believe them.

Unforgiveness creates a breach in your wall. It makes you vulnerable to attack in multiple, mind-related areas including condemnation, unbelief, fear and worry.

Only by forgiving those who offended us can we repair the breach.