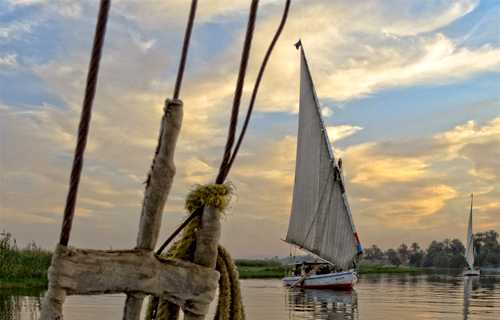 Archaeologists have discovered the remains of a little known pharaoh who may have had a connection to Joseph.

According to what was written on the tomb’s wall, his name was Senebkay. He had looted a nearby tomb of Pharaoh Sobekhotep I, stealing a cedar chest, suggesting Senebkay was not financially well off.

The tomb found in Abydos had been ransacked by grave robbers. They even ripped apart Senebkay’s coffin, including his mummy, which was buried under a pile of debris. His body was found in January 2014.

There are a couple unusual things about this particular Pharaoh.

After putting his body back together, archaeologists discovered he had died a violent death — probably in battle.  He had 18 wounds that penetrated to his bones. Archaeologists also discovered upward cuts on his ankles and lower legs suggesting he was riding a horse when he was first attacked.

He was eventually knocked off his horse and blows to the head show he was dispatched with a battle-axe. Senebkay was unique because he was one of only two pharaoh’s discovered who had died in battle. He was 35 to 40 years old when it happened.

He was also part of the little known Abydos Dynasty who briefly ruled the southern Egypt after the Hyksos invasion. The Hyksos, like the Jews, were Semitic. They conquered and ruled the Northern half of Egypt driving the Egyptian government south.

Senebkay’s remains revealed he was mummified well after death. Archaeologists suspect he was battling the Hyksos when he died and his body transported south later for burial. He was a pauper Pharaoh because of the Hyksos occupation.

There is both strong Biblical and archaeological evidence (here and here) that Joseph rose to power in Egypt during the Hyksos rule. Being Semitic, he had the same language and culture as the Hyksos. Archaeologists may have even discovered a statue of Joseph connected to the early days of the Hyksos.

Joseph was sold into slavery as a teenager and died in Egypt at the age of 110 (Genesis 50:25). So Joseph and Senebkay were likely alive at the same time.

Senebkay probably launched an attack against the Hyksos, trying to drive them out, when he died.

A later Pharaoh, Amhose I, would eventually force the Hyksos out of Northern Egypt. Amhose’s grandfather, Senakhtenre, is the only other known Pharaoh to have died in battle — probably in a confrontation with the Hyksos as well.

After defeating the Hyksos, Amhose turned against the Jews, who had settled in Egypt after Joseph’s dynamic rise to power. The new Pharaoh was fearful the Jews would join with the Hyksos, if they tried to retake Egypt.

Now a new king arose over Egypt, who did not know Joseph. 9 He said to his people, “Behold, the people of the sons of Israel are more and mightier than we. 10 Come, let us deal wisely with them, or else they will multiply and in the event of war, they will also join themselves to those who hate us, and fight against us and depart from the land.” (Exodus 1:8-10 NASV).