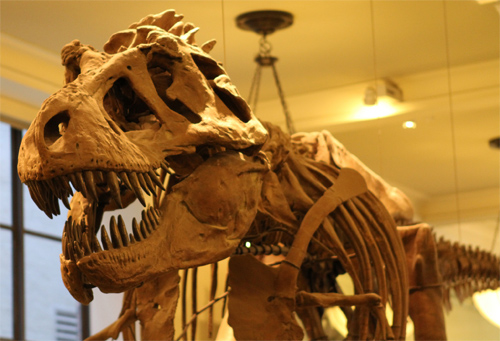 [by Dean Smith] An article in an English newspaper, The Guardian, is reporting scientists have found blood inside a T-Rex bone fragment. What is particularly interesting is that these tiny scraps of bone from the Dinosaur Park formation in Alberta, Canada were in poor condition. They had been kicking around for about 100 years, and few months ago the fossils were sent to the Museum of Natural History in London, England. (Photo: Zetgem/Foter/CC BY-NC) A scientist decided to take a closer look at these fossil fragments from different dinosaurs using a high-powered electron microscope. He had actually been studying human cells and decided to take a look at the dinosaur bones as well.