The phrase “fossil fuels,” leaves the impression that oil and natural gas are derived from millions of years of dinosaur and plant decay. As a result of this, oil and gas are considered a non renewable resource, in other words some are sounding the alarm that one day we will run out. However, a few articles are portraying another side to this debate. The first involves an article entitled “Let’s Colonize Titan” published as a blog post on the Scientific American website. In it, the authors Charles Wohlforth and Amanda Hendrix were looking at potential habitable locations for humans in our solar system. They quickly eliminated the Moon and Mars because neither has the atmosphere needed to protect people from deadly Galactic Cosmic rays. Mercury is too hot. Venus’ atmosphere is too poisonous. The authors instead nominated Titan, one of the moons of Saturn. So why was Titan chosen? Well there are a couple of reasons. First it has a methane atmosphere that would protect us from those deadly cosmic rays and secondly it literally … 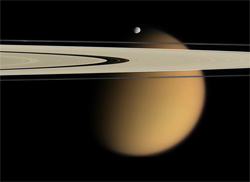 The phrase “fossil fuel” implies oil is a product of hundreds of millions of years of vegetation and animal decay. Oil becomes proof of the theory of evolution. It is further argued that since oil is a fossil fuel, there is a limited amount and once it’s gone, it is gone. However, this theory took a major hit on January 14, 2005. That was the day, the Cassini-Huygens satellite scanned Titan, a moon of Saturn, and found massive quantities methane — literally lakes of methane.

96 | The Euphrates River: Is an Ancient prophecy about to come to pass?

62 | Does a solitary Bible verse explain what happened to dinosaurs? UPDATED